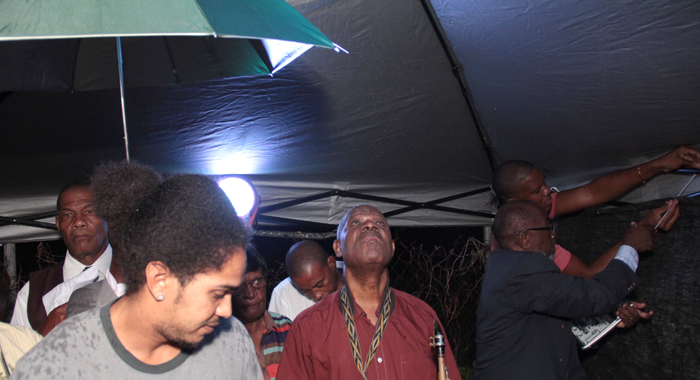 An opposition lawmaker has said he is sorry for the times that politicians have failed the Vincentians electorate.

The apology by Member of Parliament for Central Kingstown, St. Clair Leacock, came on Sunday as he addressed the Human Rights Association’s peace and prayer rally in Clare Valley.

Leacock, who is a vice-president of the NDP, noted that last Sunday’s peace rally was being held on the same day that millions gathered in France after the murder of several media workers there by Islamic extremists.

“This evening, we are here in a peace exercise for not dissimilar reasons,” he said.

Leacock said that the NDP has always held close to its heart “that the thing hat unite us in St. Vincent and the Grenadines are far greater than those which divide us.

“And so, on every opportunity which we have to demonstrate that, we seize it, hold on to it with both hands,” he told the rally, which was affected by heavy downpours of rain, one of which fell shortly before Leacock’s address.

He said that when the rains fell during the meeting, people sought shelter, and it didn’t matter who they were sheltering next to.

He further said that when the rains started to penetrate the tent under which persons were sheltering, they joined together to ensure that the equipment didn’t get wet.

“In the political world, we often find ourselves in a similar vineyard to our religious brothers and sisters, and, of course, too, our Human Rights friends who have taken the initiative to be here this evening.

“But, we are never ignorant of the fact that there is a force that they are seeking to represent that is far greater than the political order that we promote from time to time,” Leacock said.

“In this St. Vincent and the Grenadines, we who function in the name of politicians must never ever forget that it is the human suffering, the human condition, the human aspiration that is our raison d’être and that is it. The interest of the people who we serve must always come first. If we never lose sight of the fact of putting one’s country before party, if we never lose sight of the dignity of human life, then we would have done our duty.

“Tonight, on behalf of the noble institution I represent, and indeed of all politicians, I say we are sorry for the occasions we have failed you, we express regret for the circumstances that have brought us here tonight, but we seize the opportunity to redouble our efforts to ensure that at all times, St. Vincent must be a peaceful place for Vincentians,” Leacock said.