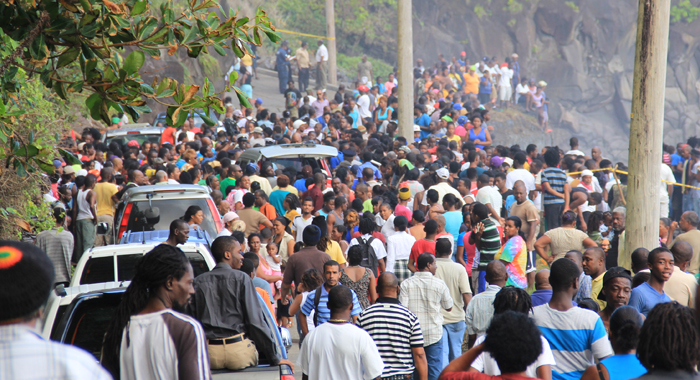 The five persons, all students, who died in the Rock Gutter bus crash on Jan. 12, will be buried in Fancy on Sunday. (IWN photo)

Leader of the Opposition Arnhim Eustace has noted the public outpouring of support to the families who lost loved ones in the Rock Gutter bus crash on Jan. 12.

Five students died and two are missing and presumed dead as a result of the incident, where a bus carrying 21 passengers, including 14 students, plunged into the sea.

Eustace, speaking on his weekly radio programme on Monday, said that this type of situation is difficult to deal with on a personal and human level.

“Some bright young people have left us, gone to meet their maker. It is for us to learn from the experience and to ensure that in te future we do everything we can to minimize the possibility that something like this will happen again,” Eustace said.

He also said that political discussions of issues that arose in the aftermath of the tragedy should come after the students have been buried.

The students will be buried after a single funeral service in Fancy on Sunday.

“And this morning I listened to some comments in terms of the care that is available by some psychiatrists and so, which I think is welcomed and well needed,” he said in reference to three overseas-based psychologist that have come to St. Vincent to offer counselling in the wake of the tragedy.

Eustace said he visited Fancy on Thursday “mainly to visit member of the families directly affected.

“And in many instances you could feel the pain that they were feeling. Some people where still a bit in shock, others were trying to come to grips with the reality that their son, or their daughter, or their cousin, or brother, or sister will no longer be with us.

“And there is the issue of those two young persons whose bodies have not been recovered. Their parents too feel great grief. In many ways, their problem would appear to be heavier than most, in terms of their coming to grips with the situation without having a body to see,” he said.

“I saw one parent there three days at the same spot after the accident. That is on Thursday on my way back to Kingstown. That is one of those parents whose child’s body has not been recovered. You can imagine that pain there? This happened on Monday and here is he on Thursday at the same site where the van went over. Some others were there with him. And I could begin to imagine the pain that he was feeling,” Eustace said.