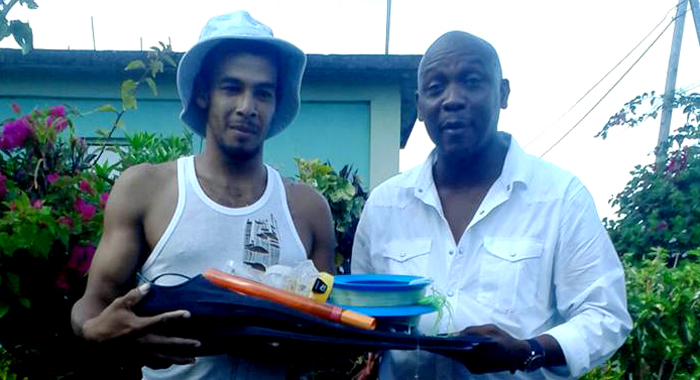 A North Windward resident who rescued three persons from the Rock Gutter tragedy has been presented with snorkeling gear in appreciation of his bravery.

At least three civilian divers took the rough seas to rescue persons or recovery bodies after a bus crashed in the North Windward area on Jan. 12.

Despite their best efforts, five students died and two are missing at sea and presumed dead.

There were 21 persons, including 14 students, on board the minibus when it careened down a steep hill and plunged into the sea.

Reports say that Derrance Lavia was on his way from the mountains when the tragedy occurred, in an uninhabited area between Owia and Fancy.

He is said to have taken to the water and was able to rescue three persons.

His exploits were published on Facebook and Paula Gabriel Edwards, Simone Gabriel and Kent Gabriel Wyllie, who live in England, were moved by Lavia’s bravery and donated fishing gear to him.

The gear includes fins, a snorkel mask, and two sets of fishing lines, purchased for in excess of EC$400.

The money was sent via money transfer to political activist Bryan Alexander, who purchased the equipment in Kingstown.

Alexander said he had given the name of the three civilian divers to donors.

In a post on Facebook on Tuesday, Alexander described Lavia as “THE HERO OF THE ROCKGUTTER TRAGEDY”.

“Mr. Lavia was happy for the generous act by the family in England. He can now continue to ply his trade,” Alexander said in the post.

The post included a photo of Lauron “Sharer” Baptiste, the New Democratic Party’s candidate for North Windward, where Rock Gutter is located, handing over the gear to Lavia.

At least two other civilian divers, Dillon Baptiste and Oneal Thomas, took to the water sooner after and in the days after the tragedy, to assist in the rescue and recovery.

“The water [is] dark; the waves [have] stirred up the water, so it is dirty, so you can’t see as much as you are supposed to see,” Baptiste told I-Witness News on Jan. 13 after a four-hour stint in the water, one day after the tragedy.

He said it was very difficult to swim in the rough sea, where the shoreline is lined with large boulders.

“It is really difficult because the current underneath [is] strong,” he said and opined that the tide has already dragged the two missing persons away.

Asked if they were concerned for their own safety, Thomas told I-Witness News, “Well, we tried to assist.”

“We just try to assist them, to make them feel pleased [after] what happened,” Baptiste added.

The Coastguard has been accused of not doing enough to try to recover the two missing student immediately after the tragedy.