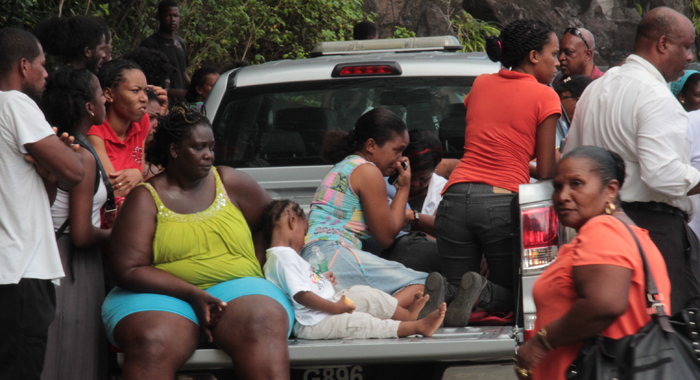 Proceeds from the CD will go to the families affected by the tragedy. (IWN photo)

A seven-member choir, comprising staff members at the Office of the Prime Minister, on Tuesday launched a CD, proceeds from which will go towards the families of victims the Rock Gutter tragedy.

Five students died and two are missing at sea and presumed dead after a minibus plunged into the sea in the North Windward community on Jan. 12.

The choir, “Voices of Praise”, is led by Roxanne James, while Godfred Pompey, permanent secretary in the Ministry of National Security, which Prime Minister Ralph Gonsalves heads, is its manager.

Gonsalves is the promoter of the CD, “The Haler”, for which persons are being asked to make a contribution of at least EC$20.

Speaking at the launch, Pompey said the group began with the introduction of the National Day of Prayer close to seven years ago.

The ministry, annually and on special occasions, engaged in prayer sessions, at which time the choir is requested to minister in song, he said.

“And in so doing, the ladies evolved into a choir. The launch of this CD today, ‘The Healer’, is for a specific cause. And our promoter, who is our Honourable Prime Minister, will outline the same. We have a well-oiled machinery in this ministry, doing it all to the honour of God,” Pompey said.

“Our prayers are with the families affected. May God continue to strengthen us all. It’s a national loss and the first effort of the choir — ‘The Healer’ — is timely, given our present circumstances. Our ministry will continue to assist in the healing process. Plans are advanced towards this end,” he said.

“This morning, on behalf of the group, I just want to say thanks to the honourable prime minister who saw the vision and who pushed us and motivated us to make this vision a fruition this morning,” said choir leader James, who also thanked Assistant Commissioners of Police Sampson and the Police Force Band.

“They worked hard with us and we made a lot of sacrifice during our lunch period. Sometime we went to work on weekends to accomplish this CD,” she said.

“… those who were affected by that accident, we pray that God will continue to strengthen you. As you listen to the songs, may it bring a healing to you, and may it continue to touch your lives for better of the country,” the songstress said.

Meanwhile, Gonsalves said the first batch of the CD has not been produced with a very flashy cover.

“It wouldn’t have, metaphorically, the raiment of Solomon, but it certainly has the loving touch of the lilies of the field,” he said.

He asked that everyone who wants a copy make a minimum contribution of 20-dollar minimum “so that we can put it in a fund to be addressed by the families of those who have suffered this terrible loss. This is the way in which we are proceeding,” he said.

Tuesday’s launch included live renditions of some of the songs on the CD.