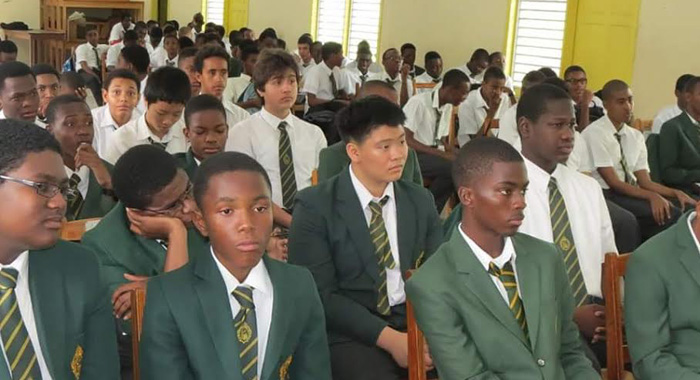 Grammar School students at the launch of their school’s Young Leaders project 2015.

This year the RBC Young Leaders theme is “Digital Citizenship: Responsibly Navigating Technology”, and the school has adopted the sub-theme “Responsible Navigation: Building Our Nation”.

The launch was witnessed by the school’s third and fourth form students, members of staff, and members of the media.

The purpose of the launch was to inform the school and the nation of the nature and objectives of the school’s Young Leaders project.

The launch heard speeches from the school’s headmaster, Curtis King, the president of the St. Vincent Grammar School’s Young Leaders 2014-2015, Alron Harry as well as the featured speaker, Cenus Hinds.

Speaking at the launch, Harry said that amidst all the negative occurrences, such as the Edward Snowden fiasco and, more recently, the alleged North Korean hacking of Sony scandal that have engulfed the media, some nations have been looking at technology as a destructive force.

“At the St. Vincent Grammar School we have adopted as our sub-theme ‘Responsible Navigation: Building Our Nation’,” he said, adding that the sub-theme embodies every aspect of the overall theme for the programme this year.

“As technology continues to rapidly change our world and the way we live, it is also becoming increasingly important for every citizen of our nation to acquire the requisite knowledge of what it means to navigate technology responsibly,” he said.

Harry said the school’s project will be geared towards encouraging “responsible navigation”, noting that the St. Vincent Grammar School proudly present a full 50-member group, the maximum number of students allowed by any school.

“This full fifty member group clearly demonstrates the level of enthusiasm that exists here at the school for the young leaders program,” he said.

“This year, our project will take us to various parts of St. Vincent and the Grenadines, namely, Barrouallie, Georgetown, Bequia, Upper Cane Hall, Calliaqua, Belair and Kingstown,” he said.

The launch also heard musical rendition by Saeed Bowman, on pan and Geran Maule, on the keyboard.

The launch was organized by the young leaders themselves and the master of ceremonies was second Vice President, Lindon Best.