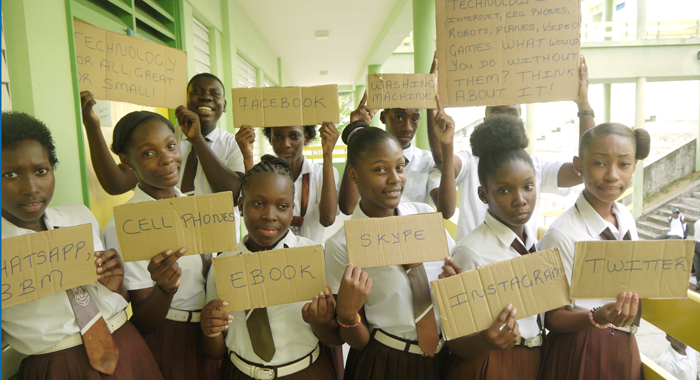 Central Leeward Secondary School students at the launch of their Young Leaders project.

During the march, the school population held placards displaying messages about technology, social media and how to use them wisely. This year’s RBC Young Leader’s competition is being held under the theme “Digital Citizenship -Responsibly Navigating Technology”. The Central Leeward Secondary School Young Leader’s project is being governed by the sub-theme “Sailing through the ocean of technology, using the paddles of education and responsibility”. The president of the group is Javel Turtin and the coordinating teachers are Vakeesha John and Sherricea Burgin.

The group is comprised of 25 young leaders.

At the rally, the young leaders briefly enlightened the students and teachers about technology, cyber crimes and ways in which persons can be responsible users online.

Young Leader Akeela Leacock gave an entertaining performance about the importance and benefits of being a young leader, such as self-respect, being a great team player and becoming very responsible.

The launch also heard from Young Leader Jamie Richards, who spoke about technology, how it can be useful, ways in which it can hinder people’s lives, the main computer crimes and how one can be a responsible user of technology.

She also stated that technological devices distract teachers, like students.

Young Leader Khadijah Gordon explained what the project is about and outlined the upcoming events.

As a part of the outreach project, over the next three months, the Young Leaders will continue to publish weekly articles in the newspapers under the heading “Technology Wise’.

Adults will pay $15 and children and young people will pay $10 entrance fee.

On this night, the public will be invited to experience drama at its best, including singing and dancing. All activities will revolve around the theme of encouraging technological responsibility.

This group will also host a lecture on March 25, where males and females, young and old will all have a chance to be educated in detail on the main computer crimes, how they affect persons and what can be done to prevent such actions.

This event will be held in Central Leeward and will be free of cost. Refreshments will be available.

On April 2 and 4, the Central Leeward Secondary School Young Leaders will be taking advantage of the moonlight and will interact with the public from 5 p.m.

During the walks, questionnaires will be given out and one-on-one interviews will be conducted, at random, with members of the public.

The information received from these questionnaires and interviews will then be used to play “Family Feud” at the school with students from each form.

This will keep the school population to be involved in the process and will ensure that they too understand the misuse of the Internet and why it is important to stop.

Finally, on April 24, the group will carry out a “whistle stop” where the students will travel from Barrouallie to Kingstown with the aid of a loudspeaker, spreading the final word on this project. Brochures and other paraphernalia will also be given out.

The funds raised throughout this project will be used to sponsor provide internet for six months to five needy students from the Central Leeward Secondary School, from September 2015 to February 2016.

The Young Leader will embark on a final project where the remaining monies will be used to replace the blackboards at the school with whiteboards, permitting the usage of Projectors in the classrooms. Fundraisers will include food and bake sales, and the school is asking the public to support their efforts to educate persons about how they can be good digital citizens, responsibly navigating technology.