Environmental charges against Bigger Bigs had ‘no grounds,’ scientist says 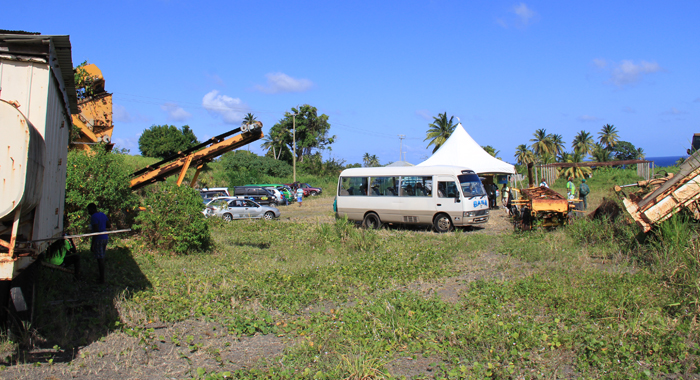 Vincentian environmentalist Dr. Reynold Murray says that the accusation of negative impact on the environment that the government used to revoke the mining licence of businessman Leon “Bigger Bigs” Samuel four years ago where unfounded.

In 2007, Bigger Trucking and Block Construction Co. hired Murray to do an environment impact assessment to set up the mining operation on lands Samuel owns at Rabacca.

He was speaking at an event at Rabacca that Samuel organised to highlight to the media and the public the challenges he faces in recommencing his operation now that the government has said that a quarry licence is not needed after all.

In the four years since the operation was shut down, Samuel’s equipment has been vandalised and the elements have also taken a toll on them.

Samuel’s technical staff is assessing how much money is needed to recommence the operation, but Samuel estimates it will be millions of dollars.

Murray, in his first public comments since the impasse began, told reporters on Saturday that in preparing the assessment he looked at the challenges mining in the area will present for people in terms of access, use of material, and safety.

He said the assessment included a number of guidelines, one of which was that the company keeps track of what is happening in the area.

The company failed to do so.

“So, at the end of the day, when the authorities said to them that they were violating some environmental issues in the way that they were mining and the fact that there was ponding, etc. on the land, they had no way of defending themselves in that way,” Murray said.

Samuel told reporters that Murray was speaking about a logbook.

He said that had he kept such a record, the government’s accusation against him would not have been able to stand.

“At the time, I didn’t see it as necessary, because almost every month, persons from the Planning Department … visited the site, and when they leave, they always say things are in position,” Samuel said, adding, “but that does not remove the fact that I definitely should have had them signing in a book,” he said, adding that he will not repeat the mistake.

“But, as I say, we are now restarting, but you can rest assured that this time I will be using the service of Dr. Murray more often to ensure that something like this never happens again.”

Murray, however, said that while Samuel did not keep a logbook, when he (Murray) examined the situation at Rabacca in the wake of the government’s accusations, he did not find evidence to substantiate the charges.

“And I discovered that there was really no grounds for the things that were mentioned there,” Murray said of the reasons that the government gave for ordering Samuel to decommission his crushing plant.

“Subsequent to that, I came back to the site and I realised there was a tremendous amount of vegetation growth, and even the areas where they had started mining has already been filled in. So there is really no degradation.

Murray said the spot where processed aggregates used to be stored is one of the few at the site where vegetation growth is limited.

“Outside of this, you have vegetation growth that is excessive and very high. The lands look pretty much like the others around, which have normal farming operations. So, apart from the derelict equipment you see around here, it is very difficult to tell that there was mining happening around here, because there really isn’t any sign of mining on the lands at this point in time,” Murray said.

He said that if Samuel resumes mining at the site it would be necessary for him to implement “some real environmental standards to guide him and safeguard him against charges like this in the future.”

Samuel has used several tactics, including lobby, public protest and meeting with government officials in his bid to have his licence reinstated.

Murray said he has not had any interaction with the government in this regard, and his involvement is a continuation of the work he did for Samuel in 2007.

“I am here defending the work that I did and speaking in terms of the environment, which is my area of expertise,” he told reporters.

At the event on Saturday, agronomist Clive Bishop, who is a member of Samuel’s technical team, again rebutted the government’s allegation of ponding on the land, saying it was without merit.

“I am very happy and I am sure that all of you are very happy, all of us are happy that this company will be able to restart its operations. I think we should note this day today as part of the Black History in St. Vincent, all of us who stood up with Bigger over the years are a part of our black history.”

Bishop, who is a soil specialist, said he and Murray went to the border of the Lady Jane River, which Samuel was accused of excavating.

“The side of the river to Bigger — that is the northern side — is well covered with vegetation, so you can see there has been no excavation there, and the other side is steep, and you can see aspects of natural erosion. And the river bed right now is filled with sediments that came down over the last couple months,” he said.

“All the technical things he was accused of were not so. So we are glad that a victory has come, good has triumphed over evil and the will of the people, all of us who supported him, is victorious today. We are happy for Bigger and we hope that his company will grow in strength from time to time,” Bishop said.

Watch below our video on this story from December 2013.

One reply on “Environmental charges against Bigger Bigs had ‘no grounds,’ scientist says”