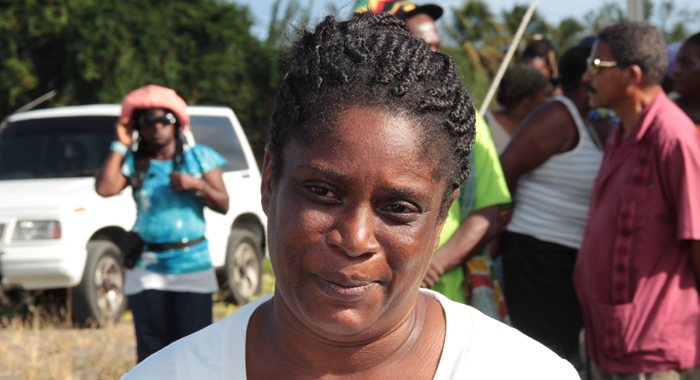 Rochelle De Freitas has been unemployed since Bigger Bigs’ business closed. The father of two of her children has also died since. (IWN photo)

“Sometimes when I study when I used to be in a job and get my salary weekly, I want to cry. It’s so heart-breaking when I come up here and see all this damage that people have done…” — Fastina Baptiste, former heavy equipment operator at Bigger Trucking

Two of the 60 former employees of Bigger Trucking and Block Construction Co. say they have been enduring much hardship since the company closed four years ago when the government rescinded its licence to mine aggregate at Rabacca.

Fastina Baptiste of Mesopotamia, a former heavy equipment operator at the company, told reporters on Saturday that since losing her job, her 17-year-old son quit secondary school because he had to repeat a year.

“I couldn’t get to send him back to school,” said Baptiste, who also has an 8-year-old son.

Baptiste worked with Bigger Trucking for four years before the closure.

“Up to the hour of now I cannot get a proper job,” she told reporters at an event at which company owner Leon “Bigger Bigs” Samuel highlighted to the media and the public the toll that the closure has had on his equipment and finances.

“It’s just like part-time here and there, and I have kids to send to school and bills to pay,” said Baptiste, who is one of two heavy equipment operators the company trained.

“Sometimes when I study when I used to be in a job and get my salary weekly, I want to cry,” Baptise said. “It’s so heart-breaking when I come up here and see all this damage that people have done, because he (Samuel) has spent a lot of money on all these equipment and building his office and his investment,” she told reporters.

But observers, citing comments made during the 2010 general elections campaign, say Samuel is being punished for abandoning the ruling ULP in support of the opposition.

Environmentalist Dr. Reynold Murray said on Saturday that the reasons that the government gave for revoking the mining licence has “no grounds”.

Baptiste is hopeful that Samuel would recommence operations again soon.

“… we want to work back with him, because I enjoy my job. I enjoy working with the company. I was so happy when I was working with Bigger Trucking. I never had a problem with him, we came along together; we had good laugh, good conversation. He was a nice boss to me, honestly. Although here and there people might say a little thing about him, but that’s normal; that’s life,” she said.

She said that after the closure, she worked with another company but that didn’t last.

Baptiste said that she used her saving and a loan to get a job on a cruise ship. Since returning, she paid back the loan, but the company wanted her to go to Trinidad for more training.

“But I didn’t have the money and that’s why I am here all now,“ she said.

Baptiste said she works as a relief worker at a gas station whenever fulltime staff members go on vacation.

She said her children’s father helps her to pay the rent and sometimes she asks family members and friends to help.

Baptiste said she also applied for a job at the Argyle International Airport construction site just after she left Bigger Trucking but didn’t get a reply.

Meanwhile, Rochelle De Freitas, also of of Mesopotamia, another of Samuel’s former employees, said she worked with the company for 11 years before it closed, and managed the operations when Samuel wasn’t on site.

She said that since the closure she has been unemployed and the father of two of her children — one who has just begun secondary school and another who just began primary school — recently died.

“I have to depend on my father. He is the one I depend on, cause I have two small kids,” she said.

Regarding seeking employment, De Freitas said, “I tried a lot. I asked around. I even asked people to help me look for a job, but I didn’t get any. And, I am not feeling very well today. I am sick, but I have to make it my business to be out here, because I am really glad that we get back the licence, so that I can be employed once again.”

The government has recently said that Samuel does not need a quarry licence to recommence mining aggregates at Rabacca.

The businessman, however, said that he will need million of dollars to repair and replace vandalised equipment.

He said that he does not have the money, and even if it is mobilised, it will take about a year before the company can begin operating again.