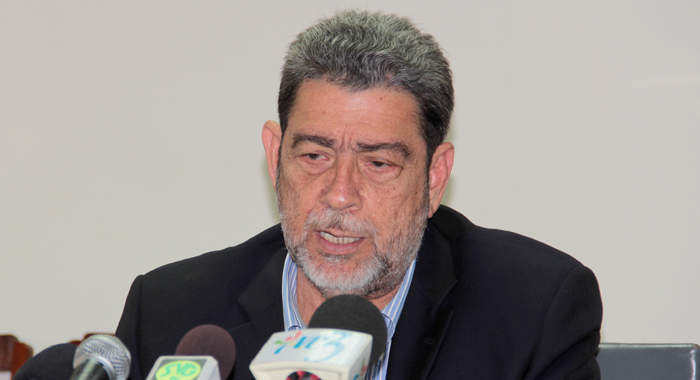 Prime Minister of St. Vincent and the Grenadines, Ralph Gonsalves on Tuesday congratulated Team Unity, an amalgam of three opposition parties, on winning the general elections in St. Kitts and Nevis, although the result have not been declared officially, 18 hours after polls closed.

He, however, expressed disappointment that the Supervisor of Elections was “yet to declare officially the result of the preliminary count” of ballots.

Gonsalves said that his government is also disappointed that the election official has not put appropriate measures in place to effect the final count of ballots in accordance with the law and established practices.

“The Supervisor of Elections has advised that for the rest of this morning in any event, no further public announcement will be made in respect of the count,” an announcer said.

“I think it is important for those words, peace, patience and calm, to simply resonate throughout our region and very much so in St. Kitts and Nevis,” Gonsalves told reporters.

He said that incumbent prime minister, Denzil Douglas, who was seeking to become the first regional leader to win five consecutive general elections, has done tremendous work for the region, generally, and in St. Kitts and Nevis in particular, especially in the area of non-communicable diseases.

“And Dr. [Timothy] Harris, I know him, I know other members within Team Unity and I want to congratulate them on what all information that has come out of St. Kitts, despite the uncertainties, that it appears as though they have done well and would be forming the government,” Gonsalves said.

“We cannot have the Office of the Supervisor of Elections in any country not conclude in a timely fashion their legal and customary mandate, that is to say, to have the vote counted preliminarily, to have a final country start,” Gonsalves said.

He noted that in St. Vincent and the Grenadines citizens get the preliminary result of general elections before they go to bed and the final counts takes place at 9 a.m. the following day so that the Supervisor of Elections can return the election writ to the Governor General.

He said the “unprecedented tardiness” of the Office of the Supervisor of elections to announce the preliminary results and effect the final count election results “has given rise to unnecessary uncertainty, particularly against the backdrop of controversies surrounding the motion of no confidence against the government and the alteration of the constituency boundaries”

Opposition lawmakers in the Federation had failed for more than a year to have a motion of no-confidence in the Douglas administration debated, although the government had lost the support of the majority of legislator eligible to vote in on the motion.

Last week the London-based Privy Council — the nation’s final court — ruled that the elections should be fought on the existing boundaries after the opposition legislators had been successful in getting it to reverse earlier court rulings that the procedures undertaken to ensure that the voting takes places on new boundaries had been followed.

“The democratic institutions of state, namely the law courts and the general elections themselves have worked satisfactorily despite hiccups along the way. It is not acceptable for the Office of the Supervisor of Elections to abdicate its legal and customary obligations or responsibilities,” Gonsalves said.

“Peace, patience, and enduring calm are requisites now more than ever for the political leaders, civil society and the people of St. kits and Nevis,” he told reporters.

“Mature political leadership, wedded to the values of democracy, constitutionalism, law and order is especially required. All must accept the verdict of the people in the highest traditions of the practice of democracy in our Caribbean civilisation.”

Gonsalves said he has spoken to Douglas, who heads the St. Kitts and Nevis Labour Party, and Timothy Harris, leader of Team Unity.

He told reporters he has also being in oral communication with other CARICOM prime ministers, including Prime Minister of Dominica Roosevelt Skerrit, who is chair of the Organisation of Eastern Caribbean States (OECS) of which St. Kitts and Nevis is a member.

Gonsalves said that he has expressed his government’s views on the matter to Secretary General of CARICOM, Irwin LaRocque and other important Caribbean personalities, but had been unable to reach chair of CARICOM, Prime Minister of The Bahamas, Perry Christie.

He said that his government continues to respect the independence of all constitutional institutions in St. Kitts and Nevis.

“We recognise too the commitment of CARICOM and the OECS to the upholding of our profound democratic values, as expressed in their foundation documents,” he said.

Gonsalves, who also read a prepared statement, said that the statement was being sent to other leaders in the region and that he was hoping for a joint statement along those lines through the OECS and CARICOM

“I want to say that the latest information I received from St. Kitts and Nevis just a couple of minutes ago is that everything appears to be calm and that there is a growing recognition across the country that Team Unity has won the elections.”

He said authorities in St. Kitts and Nevis have not requested assistance from the regional security system.

“It is an indication that everything is calm,” he said.

One reply on “Gonsalves congratulates Team Unity on ‘victory’ in St. Kitts”