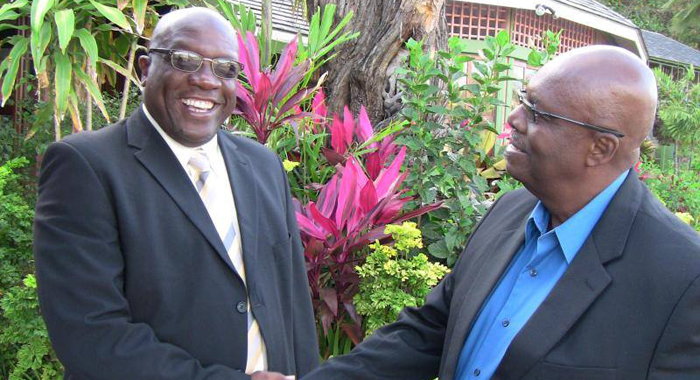 Leader of the Opposition and President of the New Democratic Party (NDP) Arnhim Eustace has accepted an invitation from newly sworn-in Prime Minister of St. Kitts and Nevis, Timothy Harris to attend the swearing-in ceremony of the other members of the Team Unity government in Basseterre on Sunday.

Team Unity, an amalgam of three political parties, led by Harris, won seven of the 11 seats in general elections in St. Kitts and Nevis on Monday, ousting the Denzil Douglas led St. Kitts and Nevis Labour Party, which was seeking a fifth consecutive term in office.

The NDP, in a press statement, pointed out that Eustace and the NDP were the only political leader and party across the region “to stand in solidarity with Team Unity through more than twenty months of Constitutional upheaval” in St. Kitts and Nevis.

“We recall that the Douglas administration failed to table and debate a No Confidence Motion filed against them by Dr. Timothy Harris and Team Unity, after Harris and Condor, two Labour MPs, crossed the floor in the St Kitts Nevis Parliament.

“Opposition Leader Eustace wrote to CARICOM chiding them for failing to intervene in the political impasse of the country, and the NDP hosted Dr. Harris and Team Unity members in protest action, during the CARICOM Heads of Government meeting in March of last year,” the NDP said.

Harris and MP Shawn Richards appeared on radio and television in St. Vincent and the Grenadines and picketed the CARICOM meeting, along with the NDP’s Parliamentary Caucus and supporters of the NDP.

Frederick also travelled to St. Kitts and Nevis, where she delivered the feature address at Team Unity’s Youth of Unity Convention, which the NDP said, assisted in the mobilisation of Team Unity’s youth membership.

Meanwhile, Eustace congratulated Harris, Team Unity and the people of the twin-island federation on “their hard-fought victory and their determination and patience in securing a change in government in St Kitts and Nevis.

“Twenty years of Labour government has come to an end and it was the will of the people that made it possible,” Eustace said.

He added that the NDP and its leadership has “stood shoulder to shoulder with Team Unity during the more than twenty-month battle to table and debate the no confidence motion brought against the Denzil Douglas administration.

“We celebrate with you now, with the same vigour with which we stood at your side during the joint picket of the CARICOM Heads of Government Meeting at Buccament, St. Vincent, and during our joint press conference to condemn the silence of CARICOM in light of the wanton abuse of Democracy in St. Kitts and Nevis by the Douglas Administration.”

Eustace said that he and his party has been steadfast in their support for Team Unity.

“Today we continue to stand with you as you usher in a new era filled with hope, prosperity and respect for all the people of your twin island nation. May God strengthen you and your team for the hard work that lies ahead,” Eustace said.