Bigger Bigs credits the media, his supporters for progress on Rabacca impasse 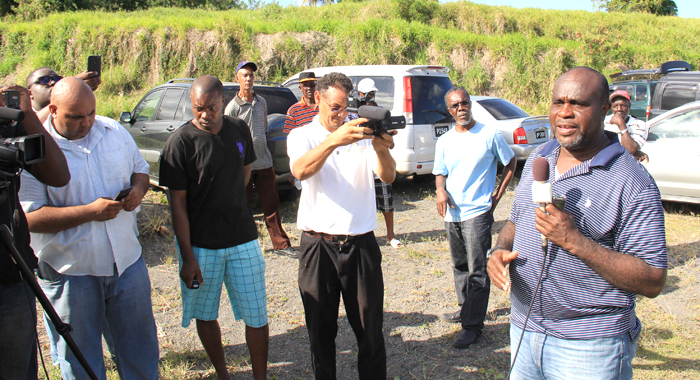 Businessman Leon “Bigger Bigs” Samuel has credited his supporters and the media for bringing the protracted impasse between him and the government to the point where the government has admitted that he does not need a licence to mine aggregate at Rabacca.

Late last year, after Samuel’s long-running battle with the state, which involved lobbing and protests, government officials told him that he doesn’t need a quarry licence, as they had previously said.

“The government has changed its mind — and let us be straight here — because of the press. The press never let us on this issue. The press did a lot and the people of St. Vincent and the Grenadines. The amount of people you are seeing here are a living testimony of what we can do as a people. And hence the reason I see this victory this evening here as a victory for the people of St. Vincent and the Grenadines through God’s grace,” Samuel said at an event at the site at Rabacca last week.

But while Samuel credited the press for progress on the impasse, some of his supporters at the site last week seemed displeased with some of the questions that the media asked him about the development.

“I want the press to ask me the hard questions and they are doing a good job at it,” he said in response to the murmuring from some members of the crowd.

Samuel said that the latest development is “a bittersweet one”, noting the state of his equipment, which have been vandalised and eroded by the elements over the years.

“They have been in this position for the last four years and hence the elements have taken its toll on them, people also have done a tremendous job in wrecking then, and I just want you all to see the bitter part of this evening’s ceremony,” he said.

Asked about his frame of mind over the last past four years, Samuel said:

“It was difficult, but I think what this has done to me, it has brought out to me my strength. I, myself, didn’t realise that is how the Lord would have done such a great job in strengthening me. And this has brought out the true strength in me. For me, I see it a test that I had to go through — not that I wanted to be tested, mind you, in this way and this magnitude, but it has really brought out the strength to show that when you really truly connected with God what you achieve.”

2 replies on “Bigger Bigs credits the media, his supporters for progress on Rabacca impasse”