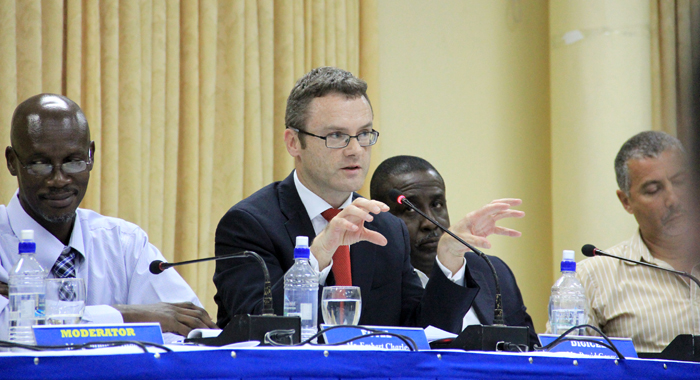 David Geary of Digicel makes a point at the consultation in Kingstown. (IWN photo)

Telecommunications provider Digicel Monday said the proposed merger of it competitors, Columbus Communications and Cable and Wireless Communications (CWC), will lead to a monopoly in St. Vincent and the Grenadines (SVG) and other regional markets that regulators should prevent or impose conditions before approving.

David Geary, general counsel for Digicel, told a panel discussion and public consultation in Kingstown that the merger “is without doubt the most important thing that’s happened in the telecoms industry since the industry was liberalised all those years ago.

“… It is about Cable and Wireless and Columbus creating what will be a monopoly over fixed telephone, fixed Internet, and subscription TV services,” he said, an allegation that the CWC and Columbus representatives at the event denied.

Cable and Wireless, the parent company for LIME in SVG, will pay US$1.9 billion plus assume about US$1.2 billion in net debt from Columbus’, pushing the total value of the acquisition to US$3.1 billion.

Speaking ahead of Geary, Chris Dehring, head of government relations at CWC, mentioned Cable and Wireless’ 140-year legacy in the region.

He sought to convince the public that the Cable and Wireless monopoly and its legacy of high prices and poor customer services are things of the past.

“It’s been 140 years and, as I said, good bad and ugly. The reality is that that company that we all knew and love to hate, no longer exists. That company, which is this massive company called Cable and Wireless, … has been de-merged over the years…” he said.

He told the consultation that what is left of Cable and Wireless is a small company called Cable and Wireless Communications that operates in the Caribbean, “which probably the biggest mistake they made was to keep a piece of the name…”

Dehring, a Jamaican, said the fact that he is the longest serving and the oldest member of the senior executive team of CWC is evidence of how much Cable and Wireless has changed.

“So, when you try to give us all the lashes, we understand, but the reality is it is hard for us to, I guess, to be bogged down by that we try to move forward. It is a tough past to get by,” he said.

John Reid of Columbus Communications said that his company has invested US$32 million in SVG and will create 500 jobs across the region over the next five years.

He said regulators should hold the companies’ feet to the fire and ensure that consumer protection is put into what the companies plan to do.

“So for us, it is all about investing the money, building the network, providing standard products across the region — not just TV, the broadband as well — and we’ve done that…” he said, adding that there will always be faultiness that they need to get right.

“And I can tell you, when I look at who is going to compete against us in these markets, I know if we don’t get it right, they will eat our lunch. They will get the customer. They will earn the right to take the customer from us, if they do it better than us. And that’s the last thing I want to do — not exactly a part of that legacy I want to create…

“I believe that if you give us an opportunity to really do what we want to do, I think you will look back and you can hold us accountable and I think you will be proud of what we have committed,” Reid said.

But Geary told the consultation that in each of the six Caribbean markets where LIME and FLOW compete, the impact of the merger will be that a major competitor will be taken out, competition eliminated, and there will be one company, instead of two.

“Plain and simple, that’s what will be happening …” he said.

He said that post-merger, in SVG, there will be a monopoly on fixed voice, fixed broadband, and cable TV.

Geary addressed the argument about which company will be bigger after the merger.

“It doesn’t really matter, to be honest. Just to take Cable and Wireless at their word, they are telling us that they are going to be the leading ICT provider. Who are we to argue? That’s probably right,” he said.

He warned that a monopoly will lead to higher prices and lower quality service, adding that while CWC says that is not the plan, this is the nature of a monopoly.

“In a nutshell, economic theory will tell us, and experience will tell us that monopoly will lead to higher prices and lower quality of service than if there was competition …” Geary said, adding that the merged company will have the ability to raise prices or could reduce the pace of introduction of technological innovation.

“I know we heard today that that is not the plan at the moment — and I’m absolutely sure that is the case — but this is what happened over time with monopolies, unfortunately…

He pointed out that a monopoly is not under any pressure to introduce innovation.

“Consumers in this region and people in this country will be familiar with poor telecoms service provided by a monopolist in the not too recent past and had a very similar name to one of the companies here today,” he said.

“With monopolies, generally what happens is that consumers lose out because of higher prices and lower quality of service,” he said.

He added that monopolies have a number of ways of keeping competition out, including making it difficult for others to enter the market and bundling services.
“The international experience proves that when there is no other competitor able to offer the same complex bundle of services, the power of the monopoly is actually expanded, because consumers switch to these bundles … and then what are your choices after that? Are you really going to switch back for one of the services? — because everything is now wrapped up together. The international experience is that it is actually tricky to do that and people tend not to.”

Geary said that in light of the proposed merger, telecommunication ministers and regulators have work to do.

“This is truly a seminal moment in the industry, and I think everybody has said we have to get this right at the moment. I think the telecoms industry can either go forward and progress or it can go backwards to where it was in 2000 with a monopoly and poor services and so on.

He also spoke of some of the conditions that regulators in other parts of the world would normally impose.

“In my experience, very few countries have actually permitted monopolies to go ahead, and this will be a first, actually,” Geary said, adding that regulators sometimes require monopolies to sell part of the business to someone else so that there will another competitor on the market.

Other protections include separation of accounts to prevent subsidisation.

“The point is, the time to protect the consumer is now. It’s before the merger takes place. It will be too late after the merger to impose conditions retrospectively or to try to control the monopolist. So, it’s only by putting in place comprehensive conditions, after a thorough analysis now, that we can prevent the industry from spiralling backwards and we can ensure that it thrives for the future,” Geary said.

3 replies on “With merger pending, Digicel evokes memories of monopoly under Cable & Wireless”