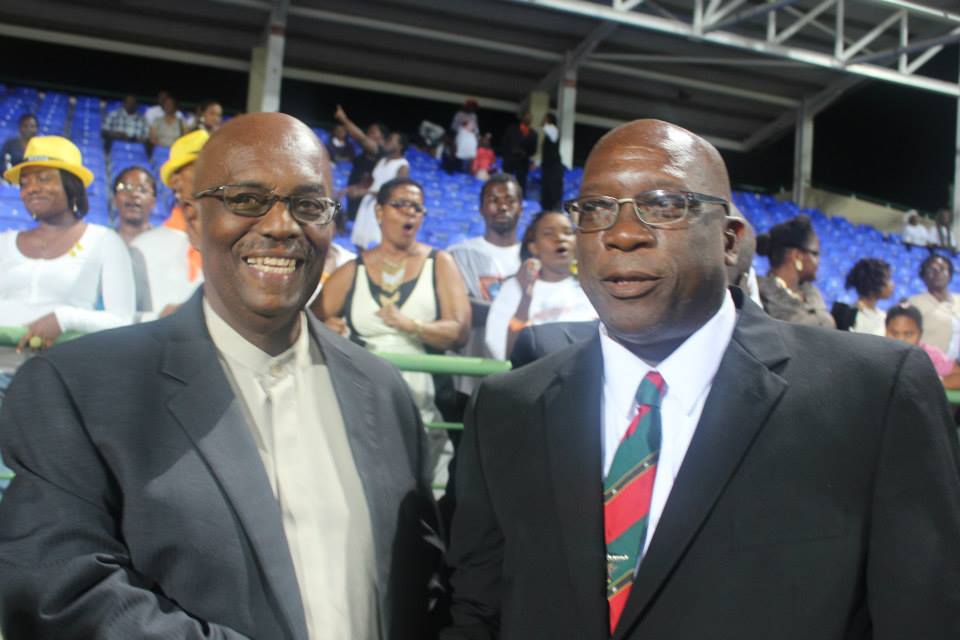 Leader of the Opposition Arnhim Eustace, right, and PM of St. Kitts and Nevis Timothy Harris in Basseterre. (Photo: NDP/Facebook)

Prime Minister of St. Kitts and Nevis, Timothy Harris, has commended leader of the Opposition Arnhim Eustace for supporting the opposition coalition from Basseterre as they tried to call regional attention to the political impasse in the twin-island federation last year.

Eustace and his New Democratic Party hosted members of the coalition, Team Unity, and joined them in a picket that coincided with the meeting of CARICOM Heads of Government in Buccament Bay.

Team Unity and the NDP have accused CARICOM, who, at the time, was chaired by Prime Minister of St. Vincent and the Grenadines Ralph Gonsalves, of failing to intervene even as then Prime Minister of St. Kitts and Nevis, Denzil Douglas, continued to rule without the support of the majority of the elected members of his country’s national assembly.

Opposition lawmakers in Basseterre failed for more than two years to have a motion of no-confidence in Douglas debated in the nation’s parliament.

“When this chapter is well written in history, it will be revealed that the Honourable Arnhim Eustace showed courage of conviction and he spoke truth to power, and he fought for democracy in St. Kitts and Nevis as valiantly as he continues to fight for it in his own beloved St. Vincent and the Grenadines,” Harris said Sunday during the swearing in of his government.

Harris had invited Eustace and NDP spokesperson Sen. Vynnette Frederick to be his personal guests at the event.

“We thank him and welcome him to St Kitts and Nevis. You will recall in our very difficult challenge with democracy, it was the honourable Arnhim Eustace who welcomed us to St Vincent and the Grenadines to ensure that our case will be forced upon the agenda of CARICOM heads,” he said.