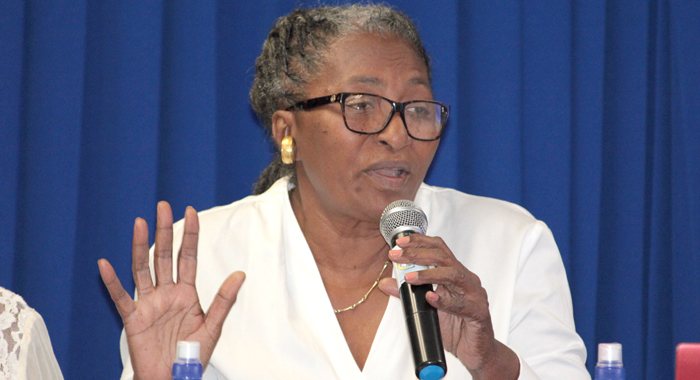 Jennifer Eustace, wife of Opposition Leader Arnhim Eustace, says she believes that “too much emphasis” is placed on whether a leader is charismatic.

“I think charisma is overrated. I honestly think so,” she said Saturday during a panel discussion on the topic “Women Voices: The Value of a True Leader”.

The discussion, organised by the Universal Peace Federation, was held to celebrate International Women’s Day.

“How valuable is charisma? Is it the most important value, and if not, what is,” moderator Kay Bacchus Browne asked the panel, which also included former Member of Parliament, now speaker of the OECS Assembly, Rene Baptiste; Leader and founder of the Democratic Republican Party Anesia Baptiste; and Rev. Dawn Bacchus-Horan.

Eustace, whose husband is often characterised as lacking charisma, went back 50 years into Caribbean integration history to support her point that charisma is just a “fad”.

“And I say that when I consider the integration movement in the region. Fifty years ago, a charismatic ANR Robinson delivered a most powerful speech — I think it was in Jamaica — arguing for political union. It was hailed all over the region as a mighty speech. Twenty years later, PJ Patterson does the same thing. And fifty years after we started the discussion on integration of these islands, we’re still in limbo,” she said.

“At the time when the Caribbean started its movement, the European union was a fledging organisation with nine countries. Today, they have almost 30 … They speak with one voice at the United Nations [and] all these international bodies. Where are we?

“There is a crisis of leadership in this place. We are insular. Tell me what is the reason we have a CARICOM passport and we have no unity called the Caribbean. We are all insular-minded.

“So what I am saying, charisma of these leaders, we put too much emphasis on it. It is a passing phase. It is a fad. Because today we will argue Jennifer Eustace has plenty charisma.’ Tomorrow, I will fess up, and I am the worst person. It is transient. Leave it alone. It is like a shadow — grabbing at a shadow. And for me, charisma is not important,” she said.

During her opening presentation on the topic, Eustace said, “It strikes me that what we often look for in a leader are charisma, commitment and a fighting spirit, concern, and a reflection of our own physical looks and image in a leader.”

She spoke of an incident after Barack Obama won the nomination to become a presidential candidate, where a black woman in the audience who was really upset told a journalist that Hillary Clinton, Obama’s opponent then, had the image of what a leader should look like.

“The implication being that Obama did not,” Eustace commented.

“This woman has been a follower of the principles of leadership of people like Elma Francois, Nelson Mandela, and I dare say, Arnhim Eustace,” Mrs. Eustace said of herself, evoking chuckles from the audience.

She said the core values a leader ought to display are authentic humility, compassion, kindness, genuine caring for others, a genuine desire to serve, putting service ahead of self, competence in their field of endeavour and a high degrees of self-awareness, accountability, a steadfast work ethic and commitment to personal excellence, and a tough-minded optimism in the face of adversity”.

“While we were talking about charisma, I remember three people, Madeline Albright, Margaret Thatcher, and Golda Meir. Would you tell me how many of these women — [including] Hillary Clinton and Malala [Yousafzai] — had charisma? I say no more,” said Baptiste, who is Speaker of the OECS authority.

Meanwhile, Anesia Baptiste told the gathering that she thinks that the most important attribute of a leader is being a servant.

“I really believe that … If you are serving, and that’s what you are doing, whether in the particular instance you are being charismatic or not, service is ideal,” Baptiste said.

“I do believe, however, at the same time, there is a time and place for everything …” she said, adding that the Apostle Paul said that at times one has to be all things to all men.

“In a sense that if you know you are dealing with an audience that is very interested in the vigour with which you speak or how you are able to bring over your message, you are going to draw them like that. Not saying that you should lie for the interest of being charismatic …

“I wouldn’t just dismiss it (charisma) all together as not being important, but, I agree, it is not the all-important. For me, the most important attribute of a leader is being a servant,” Baptiste said.

Bacchus-Horan proposed a replacement for charisma as a major attribute of leaders.

“I would really love to replace that word charisma with character, because these are the things that are important. We can speak and say lovely words, but if our words have no content and no value, they are empty.

“One of the important things of leadership is living for the sake of others and service, but the most important aspect of a leader is a leader with a heart, because heart is the impulse to love and to give. We must have what is called a parental heart,” she said.