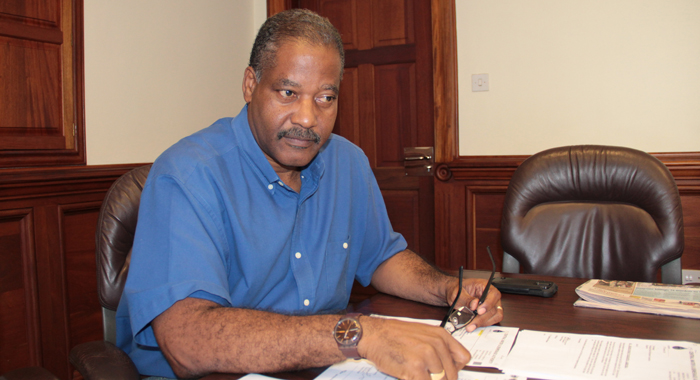 Chair of the AIA board of directors, Garth Saunders. (IWN file photo)

General Manager of the Central Water and Sewerage Authority (CWSA), Garth Saunders, is encouraging Vincentians consumers to prioritize the use of their money, and meet important obligations, such as paying their water bills, before less important things, like cellphone credit and beauty products.

He made the comments in a call to Opposition Leader Arnhim Eustace’s radio programme on Monday.

Saunders, in a letter to Eustace, said that the CWSA does offer such waivers at Christmas and during the annual Water Week, which will be celebrated March 22-28.

He, however, said that a protracted waiver of the reconnection fee without any deterrents or a penalty would encourage new delinquencies.

Saunders said that the CWSA understands that from time to time persons would fall into that problem of not paying their bills and be disconnected.

“What we have done over the years is try to bring these persons back on at strategic time so that they can enjoy the level of service that we offer,” he said.

“But what I would like us to do as a nation — I am just asking for the time now to appeal to consumers. I would like all politicians to do this. In a cellphone market, where there is such high penetration, where persons top up, on an average, five to ten dollars a day, and these are individuals, all we are asking at CWSA is for consumers to pay an average of 40 cents per person per day. That’s what the average water and solid waste bill is,” Saunders said.

“So we have to get our population to understand that they must prioritize when it comes to paying bills,” he further said.

Saunders said that persons who are having challenges paying their water bill could meet with the CWSA’s customer service department.

“We don’t have to have this played out for the whole world to know about. If we are going to be lenient, if we are going to extend ourselves for different people, we can do it. We can look at each situation. But the fact is, a protracted period, where people know that there are no penalties and there is no deterrent, they can lead us into a situation they just don’t pay and our cash flow itself gets negatively affected.”

Eustace repeated to Saunders his main concern about persons being disconnected from the municipal water supply.

“The fundamental thing that worries me is that I don’t look at water in the same way I look at electricity or anything like that, particularly in relation to diseases and the inconveniences that they (disconnected consumers) have.

“And we must do all we can to encourage as many people as possible to always pay. And if they are off for a long time, then it is harder for then to come back. And all I am saying, because of the nature and the size of the fee, given the size of the bill in certain instances, some more consideration ought to be given at this present time,” Eustace said.

Saunders said that the CWSA will focus more closely on disconnected consumers.

“We are concerned to as well, and we have been trying over the years to work with them. But it is something that we cannot leave open. We don’t want people to anticipate us — let me put it that way — because there are persons who will take advantage of it. There re person who can pay who may well take advantage of it,” he said.

Eustace, however, said he thinks such persons are in the minority.