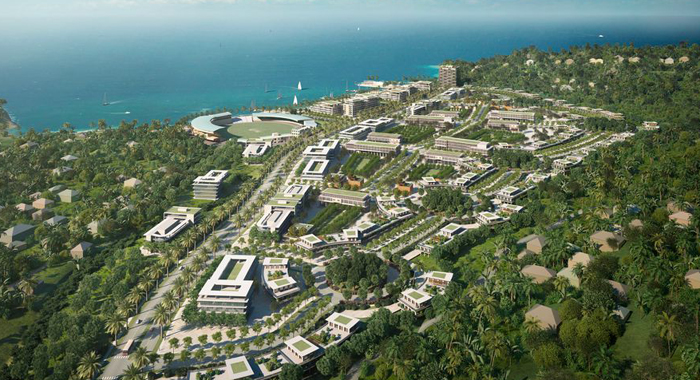 An artist’s drawing of the proposed Arnos Vale city.

Prime Minister Ralph Gonsalves has rejected businessman Ormiston “Ken” Boyea’s blame of the delay in building the proposed new city at Arnos Vale for the financial troubles that led to the local outlets of fast food chain KFC going into receivership on Monday, placing more than 100 jobs in jeopardy.

Work on the new city should have begun in 2011 when the Argyle International Airport, which is still incomplete, was expected to become operational.

Related:  ‘I won’t give up the KFC’ – Ken Boyea says as outlets ‘close’

In 2010, Boyea, one of the nation’s most celebrated entrepreneurs, completed construction of a EC$16 million in a property at Arnos Vale, which includes a mall, a supermarket, and a KFC outlet

“I jumped ahead and tried to beat the new city, and, quite frankly, I haven’t gotten it rented as I thought,” he told I-Witness News on Monday.

Gonsalves was asked at a press conference to respond to Boyea’s statement about the impact of the delay in building the new city on his investment.

The Prime Minister was also asked what he would say to private sector investors who may become hesitant about investing in light of the developments surrounding Boyea.

“I think the private sector entities in this country have a fair idea as to the reasons for the yanking of the KFC franchise. I believe that people are very clear,” Gonsalves said.

Asked if the franchise was taken away from Boyea, Gonsalves said, that is what he was told.

“If it were not taken away, it would be continuing, because it makes money,” he said.

He told reporters that Boyea has been a good businessman with a good track record.

“Anyone seriously expect that you can build a whole city out at Arnos Vale there in less than five years?” he said.

He told reporters that he does not know all the reasons why investment decision are made or are not made.

He noted that during the financial crisis that began in 2008, the Vincentian economy was at it worst in 2009 and 2010, when it contracted by an aggregate loss of 4 per cent.

However, growth in the macro economy returned in 2011 and has continued each year since then.

“Small, steady; not as big as it should be, because the recovery is still halted, but in 2010, Ken will tell you that KFC grew by 5 per cent plus over 2009,” said Gonsalves, who is also Minister of Finance.

“You and I know that Vincentians love KFC. Let me ask this question, you have two KFC, one downtown and one uptown, but a third one was opened in Arnos Vale. You would only open a third one if two can’t supply the demand…” Gonsalves said.

“I don’t know if it a throwaway line, but you wouldn’t be able to put the delay in building the city at Arnos Vale as a reason for KFC closure. I would have thought that the more important one is the one he (Boyea) made, that, listen I spent too much money to build the thing I build out at Arnos Vale. That’s what he said. That, to me, is the germane issue. I am not analysing and parsing what he said,” Gonsalves told reporters.

Boyea told I-Witness News on Monday that he has been unable to meet the mortgage payments for the EC$16 million investment, which does not include the price of the land.

“[I] don’t see how if you say you build this place so expensive out there and you couldn’t get the top floor rented and you had to take the money from KFC to pay the mortgage there, then it means that the mortgage was too high. And I don’t know what other questions would therefore arrive. It is not for me to raise the questions.

“What I am interested in seeing is that the business comes back and how it come back and so on, government doesn’t have anything to do with any of those things, and I would hope that local entrepreneurs would be involved,” Gonsalves said, noting that Boyea himself has said he would like to see Vincentians involved.

“I could understand that. He has had a full — he is in his late seventies — to be taking on all of this,” Gonsalves said of the 77-year-old businessman.

He said Boyea has abundant advice to give anyone.

“He is a knowledgeable man, and a good businessman,” Gonsalves said, noting that American businessman Donald Trump has gone bankrupt about half a dozen times.

“Nobody is saying that that happened to Ken. … I keep a perspective always on these things, and I am sure, knowing him, that every morning that he gets up, he expresses thanks and gratitude to almighty God for all the blessings he has; and he has many, many blessings. And this, put in the context of his many blessing, that is a blip,” Gonsalves said.

“I know that in this country that if a person even stumbles, however grand and strong he is, you get all kinds of comments, but I ain’t accepting any lines that the fact that a new city hasn’t been built yet at Arnos Vale is the reason for the problem with the business. That has to be a line that is thrown away in the context of the cost of the investment, which he has made at Arnos Vale, that is the point he is making, because he himself made that.

“And I consider him a good man, a tribute to this country. He has contributed immensely to the development of St. Vincent and the Grenadines; tremendous business acumen,” Gonsalves said.

Boyea told I-Witness News on Monday that he hopes his financial trouble will not discourage other people from investing.

“I went with a two-storey building, a lot of people come to it to rent, but people are not ready, like offices and so, to move to Arnos Vale,” he told I-Witness News.

Boyea said he thinks that he would have been able to manage had he only built the supermarket and KFC.

“I spent a lot of money there and I didn’t get concessionary financing. It’s tough. It’s something to look at…” he said.

“Generally, the economy, because of the airport delay, is not good.”

Asked if the development is also a commentary on the economy, Boyea told I-Witness News:

“The economy is there, but I have to say if I had stuck just to KFC then thing would have been okay, because KFC could scale back, but there is a general downturn in the economy and it happened to come when I invested a lot of money and put too much in Arnos Vale and there is a big mortgage to pay every month.”