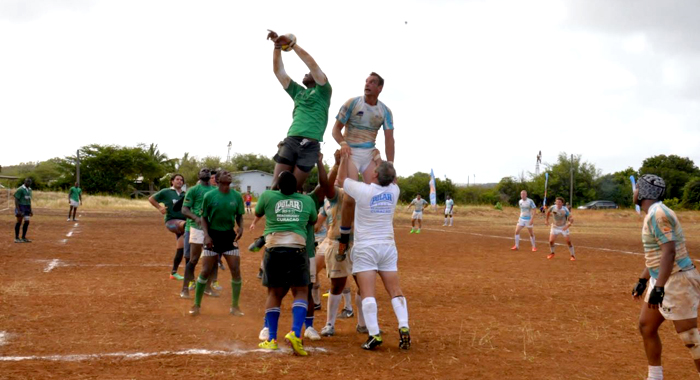 Action in the SVG-Curacao game.

Hosts Curacao, who won the group in 2014, met with St. Vincent on Saturday for what was a great game of International rugby.

St. Vincent had their travel interrupted by LIAT and arrived late the night before the match, without uniform and boots to play in.

This didn’t deter their positive attitude and by half-time St. Vincent were winning the game by 3 tries scored by Anizo Lewis, Godfrey Matthews and Gilan Comas. The second half saw both teams tired and St. Vincent suffered several injuries but defended well. After a try by George Kruger was disallowed, Curacao pushed on to level the game. Another try by George Kruger had them up again, but a last minute push from Curacao evened the game out again, just before the whistle.

The team, lead by New Zealand coach Mark Winder, have been focusing on 15-a-side since the New Year and have been training 3 times a week. They are now hopeful that when they travel to St. Lucia later this month they can win the game and possibly win the group.