GHS Young Leaders give ‘Thumbs UP’ to responsible use of technology 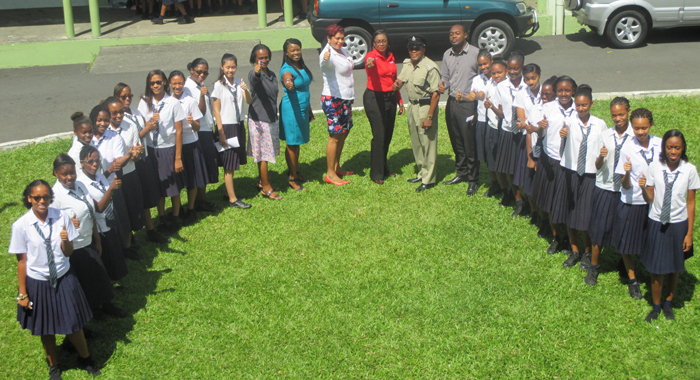 The Girls’ High School Young Leaders 2015 on Tuesday launched their “Thumbs UP” campaign, aimed at stopping the irresponsible use of all forms of technology.

The campaign is designed to promote awareness among each student and every licensed driver in St. Vincent and the Grenadines to be more responsible in the use of their mobile devices and computers.

The Thumbs UP initiative would serve as a promise to stop:

The campaign will also teach adults how to use the computers and other electronic devices and introduce students to educational websites and other online aids to help research for school.

The GHSYL Thumbs’ Up Initiative partners with the Royal St. Vincent and the Grenadines Police Force and telecommunications provider DIGICEL.

The Girls’ High School established an information communications technology policy in 2010, which was signed by students and parents to help them to be responsible users of all forms of technology.

Madame Beache, Deputy Headmistress of the GHS told the launch that the Thumbs Up Initiative is an extension of the school’s ICT policy.

Juno Deroche, marketing manager for DIGICEL, said that when the company launched a similar initiative, “Mobile Manners”, eight years ago, they too emphasized responsible use of technology.

She said Digicel is pleased to be partnering with the GHS Young Leaders in the “Thumps UP” initiative.

As a promise, everyone at the launch was asked to repeat an oath, after which a ribbon was tied around their thumbs as a symbol of their commitment to responsible use of technology.