How important is sexual purity and fidelity in Vincentian leaders? 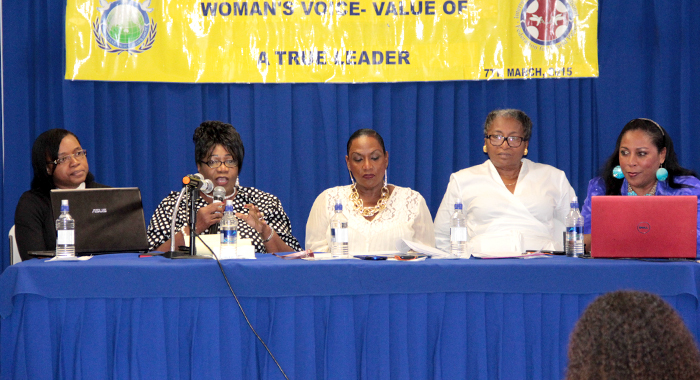 Very important, but there are not enough men to go around, so some sharing might be necessary. Further, some persons, like the calypsonian, believe “a deputy essential”.

These were some of the points made as a panel of women discussed sexual purity and fidelity in leaders at an event last weekend to mark International Women’s Day.

“… what is very important is that a leader is supposed to have loyalty, trust, and fidelity between him and his spouse, if he is married,” panellist Rev. Dawn Bacchus-Horan said.

“And if a leader is in a public office and he misbehave, in terms of infidelity and other behavioural patterns that do not reflect family values or a parent, he or she should not be in office, because that sets the tone for the whole nation,” Bacchus-Horan further said.

The panel, moderated by Kay Bacchus-Browne of Universal Peace Federation — organisers of the event — discussed the topic “Women Voices: The Value of a True Leader”.

The other panellists were Jennifer Eustace, wife of leader of the Opposition Arnhim Eustace; former Member of Parliament, now speaker of the Organisation of Eastern Caribbean States Assembly, Rene Baptiste; and Leader and founder of the Democratic Republican Party, former senator Anesia Baptiste.

Bacchus-Horan said the family is the cornerstone of the nation and she believes that a leader “must exemplify the qualities of a strong parent in the sense that fidelity is very important”.

She said that in the United States, where she lives, “misbehaviour in public office in terms of infidelity is not tolerated”.

“Family values should be one of the strongest qualities we look for in a leader. Is he married? Is he faithful to his wife? Is he trustworthy? All of these things are part of the good values of a leader.

“… This is one of the reasons that we have problems in the community. Because if the leader cannot set the example of a good parent, of a faithful husband, of a leader with integrity and loyalty — faithful husband or wife — they should not be in public office. They need to be removed. Not just as a political leader; within any field of endeavour,” Bacchus-Horan said.

“We need to have that kind of leadership. And I would like to declare this to St. Vincent and the Grenadines. If we need to get a leader, he or she must be faithful to his wife or her spouse or they need not be a representative of the nation.”

Eustace said that Caribbean nationals do not put great weight on fidelity.

“You are faithful until you are caught,” Eustace said, adding, “So we can’t just look at the leader. We have to look at ourselves too and our own value system.”

She noted that some persons adhere to the principle of one man, one wife.

“What happen to all the other women? The women outnumber the men. We have to be practical too. What are those women to do? I am not advocating that everybody has a deputy but I am saying we do not put any weight on these issues. We take them in strides, we whisper about them.

“Sometimes, we talk about them in public – ‘Oh, Mr. A has a girlfriend.’ It doesn’t cause any stir. It might cause more of a stir depending on who the girlfriend is. But, generally, that is no big news. Even in the United States, everybody is doing it. But you only get punished when you are caught. So, the idea is to cover up your actions,” Eustace.

Rene Baptiste, the only unmarried woman on the panel, who quit politics in 2010, asked what would have happened “If I had remained in politics and decided that I wanted to be a leader? What was somebody going to say about me being a leader?

“They would have to find out if I have a man somewhere and if I’m faithful to that man? Because I am not married. And what you know about my fidelity? The question of fidelity may not arise, because I am not in a relationship that requires fidelity. I am not married; I have not made any vows before God and before man that required me to do that. In the office that I hold as prime minister, were it so, what is required of me as a woman who is single?” Baptiste said.

Meanwhile, Anesia Baptiste said that not only do people not put weight on fidelity, “but if the tables turn and it were a woman leader, there will be a different standard…

“The woman would not so easily ‘get away’ with certain things as the man would,” she said, adding that this attitude goes back to one’s value.

“…it is seen as macho for the man to have more than one woman, or a light thing if he is even caught, but if it were a woman in the same position, the standard, sometimes, are different.”

She, however, said she believes fidelity is “an important aspect, especially when you are serving in very important position in public office.

“Not that it is not important if you are not in public office, because, as a Christian, I hold certain values with respect to how we ought to be; we ought to be faithful to our spouses and so on,” she said.

“Not everybody is married; not everybody is Christian and practicing Christianity. Some may be committing fornication, some adultery. I am asking the question, I am throwing it out there: Are we saying that they should be held to a rule that you must function this way in order to function in their jobs? Or are we talking about leaders in public office and what is expected of them, and the fact that it would be seen as proper, if they are serving in public office, they must have a certain public behaviour?” she said.

She said the reality is that there are directors and other persons who may have “their personal issues”.

“… Would we say they are disqualified from holding the post because they have this practice in their personal lives? Or when would we draw the line? Where are we saying it should be applied?” she said.