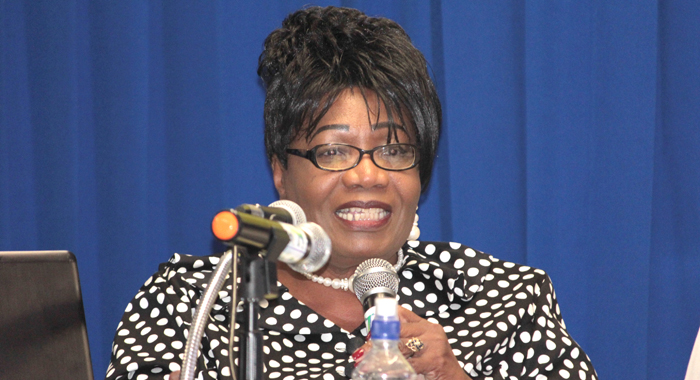 Former Member of Parliament in St. Vincent and the Grenadines, Rene Baptiste says she will consider voting for a woman prime minister, but said citizens must also decide if they are prepared to defend the dignity of such a female leader.

“… you in this country, when you hear John Public castigating and tearing down a woman to pieces, … would [you] defend that woman’s honour? … [Or would you] pay a newspaper to print a whole page of nastiness about a woman?” she said in response to a question on Saturday at a panel discussion to commemorate International Women’s Day, being celebrated today, March 8.

The discussion, organised by the Universal Peace Federation, discussed “Women Voices: The value of a True Leader”.

Baptiste, who is speaker of the Organisation of Eastern Caribbean States Assembly, and a former two-term elected Member of Parliament in SVG, said her response was not from any textbook.

“It’s the real thing in our politics in this Caribbean,” she said.

She mentioned the late Dame Eugenia Charles, Dominica’s first, and to date only, female prime minister, as well as the nation’s longest-serving prime minister (July 21, 1980 to June 14, 1995) as well as Portia Simpson-Miller and Kamla Persad Bissessar, the first and sitting prime ministers of Jamaica and Trinidad and Tobago.

“I want you to examine these three women what they all had in common, and where, in the time of Dame Eugenia, and now the two, one in the north and one in the south, and if you in this country would vote for a woman to be prime minister?” Baptiste said.

“Because I can tell you from experience, it was the women that went on the radio station to talk about me in the worst possible terms and to say things about me they know nothing about. And it was men who defended my honour,” Baptiste said.

“So when I hear people get up and talk, ‘Oh we want a woman this, a woman that’, I want to hear you all get up and defend this young woman who has decided she is a leader of a political party and in the upcoming general election campaign, I would not hear women … say anything about this young woman’s character; because it is part of our Caribbean landscape to say the nastiest things,” Baptiste said in relation to DRP leader, Anesia Baptiste.

Meanwhile, in making a contribution from the floor, President of the SVG Human Rights Association, Nicole Sylvester, said there was a need for leaders to respect the dignity of women.

“As we celebrate International Women’s Day, I think it is critical that at this time we see there is a need for leaders who truly respect the value and the worth of the woman,” she said.

“We talk about women’s voice, but we need leaders who respect the dignity of women and we need to look at the leaders. We have had tremendous leaders who have been women.”

She also spoke of former Prime Minister of Dominica, the late Dame Eugenia Charles, “who as a woman, and in her time, she created history, but she certainly led us in a certain way.”

Sylvester also said that the discussion did not touch on the limits of leaders, adding that this was an important part of the conversation.

“It is critical, when we think of a true leader, is the leader who will realise when it is time to let go,” she said, adding, “And I think that is important in the context of what we saw in St. Kitts,” a reference to the elections last month in which Denzil Douglas was voted out of office after 20 years as Prime Minister.

“And it is not just a question of politics. In every sphere, leaders must learn to let go and in terms of the political realm, I yearn to see a leader, who, in our context, after a period of two terms of leadership, will say it is time for me to let go and allow other true leaders to emerge. This is what we need in this type of dispensation, and I hope that we as a people will call for that,” she said.

Sylvester also listed among exemplary female leaders Margaret Thatcher, the longest-serving British Prime Minister of the 20th century and the only woman to have held the office.

“But I think the time has come for limits on leaders in our region. So therefore, those who are aspiring — Anesia, I would hope that you will also know when to let go. Honourable Arnhim Eustace as well. When you get there, you will also know that you are looking at a period of terms,” she said to Eustace, who was in the audience.

“I respect the American system, where we know how good President Obama may be, but we know that his time is coming to an end,” Sylvester said.