Eustace outlines NDP plan to ‘get out of women’s way’ 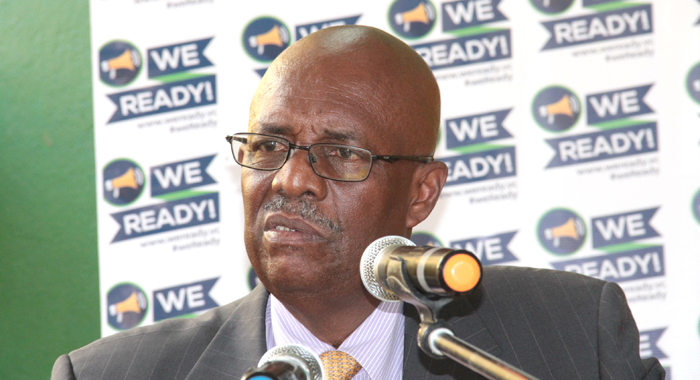 Leader of the Opposition Arnhim Eustace on Monday said that the successive Unity Labour Party (ULP) administrations have “actively set back the women’s agenda” in St. Vincent and the Grenadines as he outlined 10 ways in which a New Democratic Party (NDP) administration would “get out of women’s way”.

Delivering the feature address at the NDP’s “Conversation with Women”, Eustace said that while many strides were made in the 1980s and 1990s, “women have lost that gait since”.

“I mean by this, that a responsible government recognises that it cannot give women empowerment. For none empowers a woman but herself. It is the role of government, and men too, not to stand in the way of women’s empowerment,” he told the gathering at his party’s headquarters and radio audience.

“I have not and will not come before you, women of this nation, claiming to offer you gifts of empowerment. Instead I give you notice that the New Democratic Party administration will not prevent your empowerment, and that we will work under your guidance to create the environment most conducive to it. It will foster a society in which women and any other disenfranchised group find and devise their self-determination,” Eustace said at the event.

Eustace said the Ralph Gonsalves-led ULP government is “possessed of neither the track record, moral authority to engage nor inclination to listen to women St. Vincent and the Grenadines will continue to cannibalise women and children.

“Women and children shall continue to be objectified; exploited as cheap labour; sexually harassed; discouraged from becoming opposition candidates; subject to the ridicule of other women; told by women parliamentarians that one of their breasts is to suckle a child and the other is for the comfort of a man; and horse-traded for rent and promotion; blamed for their own violation when warned about the clothes they wear.”

He said the ULP administrations must be held to account for its treatment of women, by the nation.

He said that by building upon its past successes, secured through women’s direction of women’s affairs, the incoming NDP administration will “get out of women’s way” by reforming sections of the police force by creating a special unit within the Criminal Investigations Department staffed not only by trained female and male officers, but with consulting doctors, social workers and counsellors, with specific training and facilities to address complaints of domestic and sexual violence.

Under this policy, all police officers, especially in district police stations, will be trained to address domestic violence and rape allegations.

It will also be mandatory that all allegations of abuse be recorded and acted upon.

The CID and district police stations will be provided with templates for the interview, advice to and follow up of domestic violence and sexual violence complaints.

The policy will also require the presence of a female officer at all times at all stations to receive or be physically present at the receipt of complaints of sexual violence.

Eustace, a former prime minister, said that an NDP administration will revise and broadening the police training manual to include training for all police recruits in domestic violence and human trafficking.

An NDP government will implement the mandatory use of rape kits in medical examinations of rape victims at all district clinics and hospitals.

Under an NDP administration, there will be the passing of legislation to criminalise sexual harassment and to make it illegal for a husband to rape his wife and amending existing legislation by removing the requirement for the victim to bring evidence to sustain a criminal charge against men who commit statutory rape, Eustace said.

The policy will make mandatory the reporting by all medical personnel of births to minors at hospitals and clinics or wherever that birth may take place.

There will be the implementing the collection of data relative to domestic violence, and violence against women nationally, including its dissemination to the public.

Eustace said that his government will instituting and enforce a code of conduct within the public service at all levels that provides for protocol on reporting sexual offences including sexual harassment in the workplace.

“Respect for the women and girls in our society must be a part of how this government conducts itself. We must set the example,” he said.

He said that an NDP government will implement the party’s Social and Spiritual Redemption Charter “to provide women and children with proactive opportunities at the community level”.

Eustace told the gathering that when he says the role of government is to get out of women’s way, he refers to the “excellent example” set by the NDP administrations from 1984 to 2001, “when Government cleared the obstacle of unequal pay through the passage of the Equal Pay Act”.

“Also during that period, the NDP administration attempted to level the playing field through land ownership quotas. Women raised their status by taking advantage of the 38 per cent women’s ownership quota in the distribution of lands at Orange Hill and the provision of 8 per cent interest mortgages to women at the National Commercial Bank.”

He also noted that the NDP removed the obstacle that required women teachers to resign upon pregnancy.

“Under the NDP, for the first time, married women could file income tax independently. It was the NDP that introduced the tax-free allowance, which today stands at $18,000 per annum.

“Under the NDP, NGOs wrote their proposals and sought funding directly from funding agencies. Now it is all done through the government and therefore blocked, mishandled and/or stymied by this administration,” he said.

He said that currently, while there is a Gender Affairs Division with staff and allocation under the Estimates, it appears to have no on-going programmes.

“Issues are treated on an ad hoc basis. For example the anniversaries of the CEDAW Convention and International Day for the Elimination of Violence Against Women are cause to host events, but there is no sustained programme of activities or interventions by the Gender Affairs division, so nothing happens.

“Although there is more staff at the Division, the capacity and output are far from adequate. Under the ULP there is little to no sex- or gender-specific data collection by the Division to assist the tailoring of policies either.

In the absence of women’s and domestic violence policies, there are and can be no structured programmes,” he said.