Straker’s criticism of Maxwell Charles ‘blown out of context’ (+Videos) 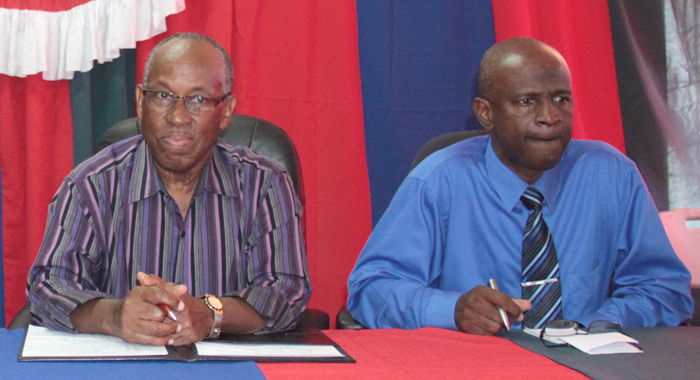 MP for Central Leeward Maxwell Charles on Monday said he wants “to refute any statements made” about his ability to be a representative in Central Leeward.

His comments, at a Unity Labour Party (ULP) press conference came one week after a surreptitious recording surfaced in which Sir Louis Straker, who has come out of retirement to replace Charles as the ULP’s candidate in Central Leeward, described Charles as a laid back politician who failed to represent his constituents.

“… in no uncertain terms, I would like to refute those statements, wherever they are made, whether it be CNN, BBC, or wherever,” said Charles on Monday, without referring specifically to Straker or the comments. (See video below)

“Listen, Charles is my brother and is my good friend and is a fine gentleman — a nice person. But there were a lot of complaints about him that he is too laid back,“ Straker said in the recording.

Straker said that when constituents came to him, he told them he is not the representative for Central Leeward and that they should go to Charles.

“They will just suck their teeth and walk ‘way as if to say tha’ waste of time. Listen, Maxwell is a fine gentleman, but I don’t think he is cut out for –” Straker said.

In 2010, Charles replaced Straker as the ULP’s candidate in Central Leeward. Straker represented the constituency from 1998 to 2010.
Speaking at the same press conference on Monday, Straker said he “had some criticism as to the style, not to the substance of Maxwell.

“And it’s completely blown out of context,” he said.