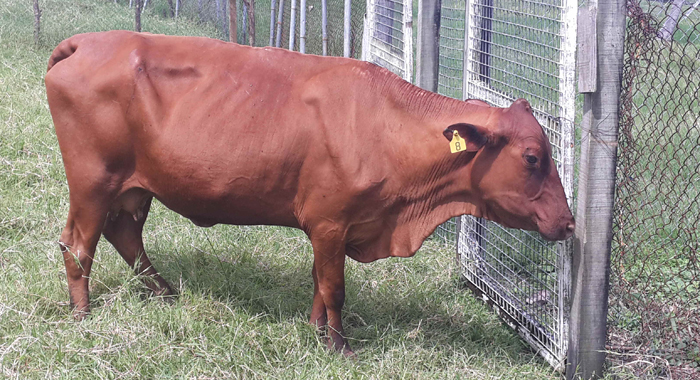 The Ministry of Agriculture is hoping to inseminate artificially 100 heads of cattle by the end of 2015 in the course of its livestock development through artificial insemination initiative.

Cuban reproduction specialist Adael Bernal Sol gave the figure as he continues to work with the ministry’s veterinary department and cattle farmers across St. Vincent and the Grenadines.

Bernal has conducted general assessments on cattle production in SVG and, in collaboration with veterinarian officer, Coleen Phillips, has visited various cattle farmers across the country including the Rabacca Livestock Station.

The assessment included examinations on the breed of animal, body condition, lactation cycle and the overall diagnosis.

An assessment on the Rabacca Livestock Station revealed that of the 14 animals examined, five were pregnant and close to giving birth. The two-member team will continue to monitor these animals until their gestation period is complete.

Phillips said the Ministry of Agriculture is steadfast in its plan to take the livestock industry in SVG to a new level, adding that following the exportation of cattle to Grenada over the last couple of years, the ministry realised that it needs to replenish the stock.

She added that three new breeds of cattle will be introduced in SVG soon to serve the dual purpose of meat and milk production.

Minister of Agriculture Saboto Caesar congratulated the team for assisting farmers in raising the bar in livestock production.

He outlined that SVG is being recognised across the region as the largest regional exporter of cattle.

The livestock Development through artificial Insemination and Breeding Programme is a collaborative effort between the Ministry of Agriculture and the Cuban Ambassador in SVG, Luis Castillo Campos.

AI requires good record keeping. With proper records the chances of accidental inbreeding would be nil. Good records would help you to know who is in gestation, when you have bred or is expected to breed the animal, and it would also allow you to know with which male you have bred the female.

Only in circumstances deemed necessary. Meaning, if the female has not been presenting heat normally, or where we are in need of ensuring efficient use of a consultant or specialist on ground.

No. we can inseminate pigs, birds, rabbits, horses, cows, goats and fish; with some efficient degree of success. However, in animals like goats, dogs and cats it is preferable to do Embrion Transfers. This is where you have a Donor female animal, generally a way superior breed, and a receptor female who can be of any genetic quality because she simply acts as a surrogate mother.