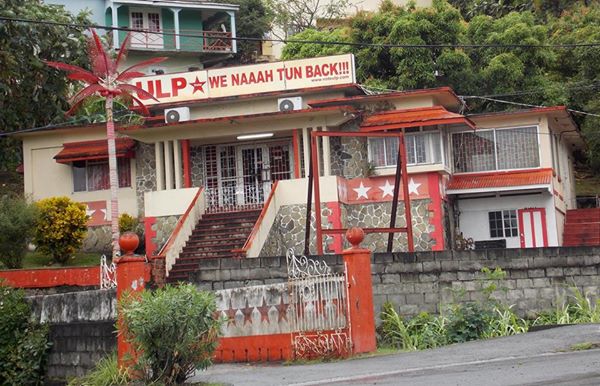 The building on Murray’ Road that houses the ULP’s headquarters. (Photo: Ashford Peters/Facebook)

The ruling Unity Labour Party (ULP) has been asked to vacate the rented property in Murray’s Road where their party headquarters is located, having amassed some EC$100,000 in unpaid rent since 2011.

A notice to vacate the building in one month was sent to the party’s general secretary Julian Francis on Monday and a copy was sent to party leader, Prime Minister Ralph Gonsalves.

Reports say the ULP, which took office in March 2001, initially leased the building in 2007 for one year with option to renew the lease. After the lease expired, the party began renting on a monthly basis but defaulted in payments for years.

When contacted on the matter Wednesday afternoon, lawyer Kay Bacchus-Browne, who is representing the building’s owner, Lione Coombs, confirmed the information.

She said that at the time of preparing the Notice to Quit, the ULP owed her client $96,000, but subsequent to that her client gave additional information which upgraded the amount owing over $100,000.

Asked what would be the next step if the ULP fail to vacate the building by the time ordered to do so, Bacchus-Browne said she would take legal action.

The notice to vacate comes as the party prepares to celebrate its 14 anniversary in office at a rally in Calliaqua tomorrow, Satruday.