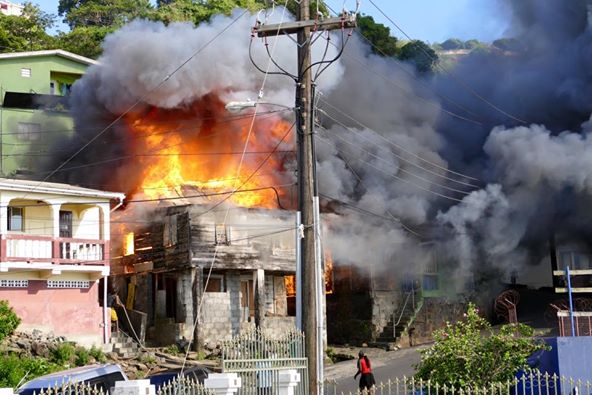 Two wooden houses were destroyed and two damaged as a fire swept through a section of Upper Sharpes Street/Long Wall, Kingstown Wednesday afternoon.

Fire fighters and at least two civilians contained the blaze, preventing it from doing further damage to the two houses and others in the area.

Two men used a hammer to remove galvanize sheets from the roof of a house where the fire had begun to burn the roof.

They then used a garden hose and a bucket of water to douse the fire, saving the two-storey concrete house in the process.

The occupants of the two other houses were not so lucky, as the fire destroyed the buildings, one of which is said to be almost 50 years old and built of mostly pitch pine.

Elvis Seales, owner of one of the houses that were destroyed and another that was damaged, said he was in Stoney Ground preparing to celebrate his father 101st birthday on Thursday when he got word of the fire.

“So I ran as fast as possible to get up here,” he told I-Witness News.

Seales, 53, said he had his musical equipment in his house that was destroyed.

He had recently begun to move his stuff to the house that was destroyed, having secured a tenant for the one that was damaged.

“This one here, the whole back of the roof and the bedroom [was damaged],” he said of the damaged house, adding that the building was still on fire when he arrived on the scene.

“I had to come and basically try and out it,” said Seales, who lives with his girlfriend and 10-year-old stepson.

Seales told I-Witness News that he was told that the house where the fire broke out “is supposed to be an abandoned building but is occupied by three persons”.

He said he lost his speakers, mixing board, and stands for his pan.

He said he had taken his tenor pan with him, and commented, “At least I have my pan still…

“Right now, I am just stressed, confused and all of that,” he told I-Witness News.