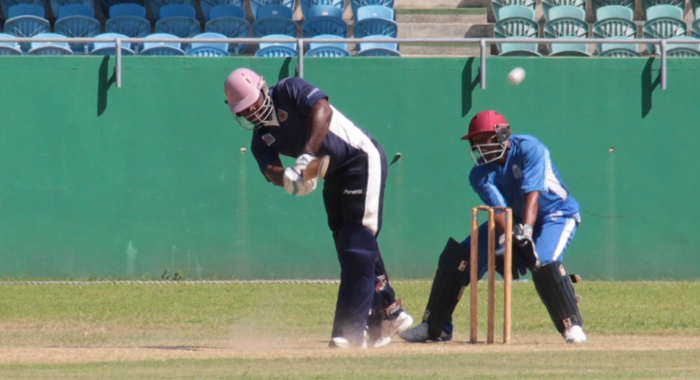 SVG police, behind a polished unbeaten half century from opener Salvan Browne, retained the Miller-Clarkson Trophy with a comfortable 7-wicket win over their Grenadian counterparts at the main Arnos vale Playing Field on Good Friday.

It was the fifth time in as many years, and from inception in 2009, that the Vincentian lawmen had incarcerated the piece of silverware put up by then Commissioner Keith Miller of SVG and his counterpart Commissioner James Clarkson of Grenada.

The fixture, which was contested within the Police Easter Cricket tournament currently taking place at Arnos Vale, was witnessed by a reasonable band of spectators who were treated to bell-ringing and flute-blowing by the supporters of the SVG Police cricket team.

It was SVG Police who won the toss and asked their opponents to bat first in in conditions fit for a jamboree with the sun bedecked in golden regalia and the pitch and outfield the main course in a buffet dinner.

The visitors looked well to put a very challenging total on the tins when Lindon Lawrence (32) and Anil Paul (21) had raised 53 for the first wicket inside the 7th over before Paul chopped an innocuous delivery from the idle medium pace of Kenroy Martin onto his stump. He struck 4 fours, 3 of them impressive hooks off the attempted bouncers from Mohammid Lavia. Five runs later, Leon Chehester (4) was bowled by Elmore Alexander. Lawrence then went by the running out route at 76/3.

Roland Cato then took over proceedings with an impressive half century to push his team over the 150 mark through some sensible batting in partnership with the middle-order as he added 37 for the 5th wicket with Randel Baptiste (27) and a further 37 unbroken for the 6th wicket with Imran Francis (*4).

Cato struck 6 fours and 2 sixes, and, as an indication of his level of fitness, had 11 singles and 5 twos. Alexander ended with 2/24 and Martin 2/30 for the SVG Police.

Set a tricky target of scoring over seven and a half an over, SVG Police did the “fall in” before going into the “slow march” and then the “quick march” as openers Browne (*69) and McLeon Williams (32) featured in a 72-run partnership with some exciting shots. The partnership was broken when Williams was run out. Danson Andrews (26) and Browne added 49 for the second wicket before Andrews ran himself out. SVG Police also lost the wicket of Gosnel Cupid (8) at 134/3, but Kenneth Dember (7) stayed with Browne to the end to give his team a continued gridlock on the trophy.