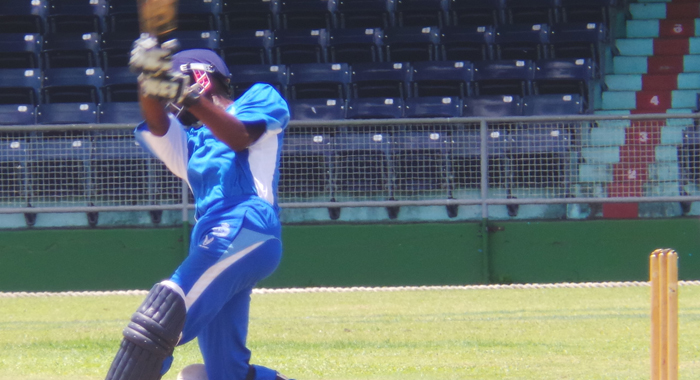 The Vincentians, behind a superb 92 by all-rounder Kenneth Dember, advanced to the final after playing to a nail-biting tie with St. Lucia in what was a virtual semi-final in front of a fair size crowd Saturday afternoon.

Organisers said that the playing conditions stipulated that points must be shared when both teams end with the same total, as against the Super Over, which now decides such games. This being so, SVG ended with one point ahead of the St. Lucians and squeezed through to the finals.

But even after the match had apparently ended in a tie, Mr. Controversy made his customary unwanted appearance with the scorers only having the SVG team total at 173. The matter was clarified after 15 minutes of recount and calculations as it was found that 4 runs was not credited to Dember.

St. Lucia, who were asked to take first knock in top class conditions, began with Sherwin Charles and Esran Gabriel and got away to a breezy start as the pair posted 50 inside the first 6 overs. It was Gabriel (39) who was first to go when he was trapped LBW by Elmore Alexander with the total on 62. The second wicket fell at the same score when Alleyne Prospere (0) was caught off the bowling of Kenroy Martin. The Vincentian bowlers then took the initiative and reduced their opponents to 83/4 in the 11th over, with Charles going for (21).

But wayward bowling and sloppy fielding punctuated by some impressive stroke play saw the visitors rally first through Cyrille Charles (20) and David Baptiste who added 53 for the fourth wicket then Baptiste (47*) and Lecic Prospere (*18) who added 31 unbroken for the 7th wicket as 20 runs came off the final over, which saw two easy chances being floored.

Alexander — 3/9 from four overs — was the best of the bowlers, with pacemen Romario Bibby 0/42 and Mohammid Lavia 0/52 proving overly expensive.

The Vincentians, faced with the task of scoring just under 9 runs an over, suffered an early setback when their big-hitting opener McLeon Williams (5) was magnificently caught behind by the wicketkeeper with the total on 12. Regular number three, Danson Andrews, had suffered a shoulder injury while fielding and had to be taken to the hospital for a precautionary check and this resulted in Dember being promoted to fill the breach. And the former Victors ONE player did not disappoint his colleagues or the crowd. He approached his duty without the slightest of nerves and played some brilliant shots to all parts of the field. He added 76 for the second wicket with captain Salvan Browne (32) as the 50 came in the 6th over similarly to St. Lucia.

Dember, by this time with the possible sounds of the bugle signalling the charge, added a further 60 with Parnel Browne (11) for the 3rd wicket before he held out on the deep midwicket boundary 8 short of what would have been a well-deserved century to make the total 148/3 with 30 needed from the final 3. He struck 8 fours and 3 sixes.

Browne went in the next over as the score slipped to 149/4. Gerald Gould struck two lusty blows but both him and Lavia went to leave the score 167/6 with twelve needed off the final over.

Andrews who had returned from the hospital and was passed fit enough to bat went to the crease with Lavia’s dismissal. He scrambled a single off the first ball. His partner Gosnel Cupid (*4) did likewise off the second ball. Andrews then top-edged to the third-man boundary for 4, missed an attempted cut off the next ball, flicked the 5th ball to the long-leg boundary, missed the final ball but scrambled a bye with the ‘keeper missing the stumps with Cupid well short of his ground and Andrews (*9) just getting in ahead of the relay.

This sparked celebration, then confusion, then discussion, then clarification and finally confirmation of the result — a tie.

In the other match to determine SVG’s opponents, Grenada beat Barbados by four wickets.