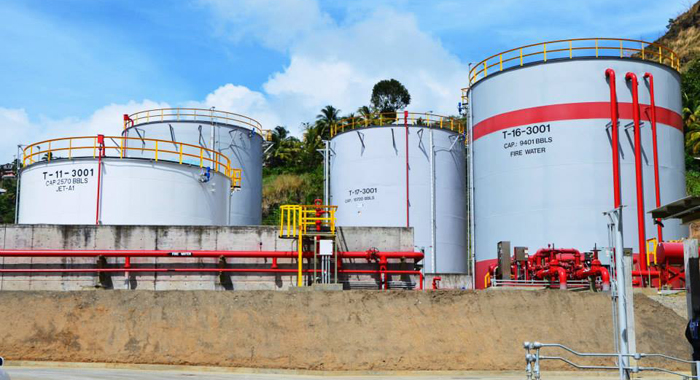 The government on Tuesday celebrated the completion of construction work on a new fuel storage depot that will see national fuel storage moving from 10 to 40 day’s supply.

Hugo Chavez Fuel Storage and Distribution Plant located at Lowmans Bay, near to the Lowmans Bay Power Station, will have a combined storage capacity of 34,000 barrels of fuel, enough fuel to generate electricity for three months.

Thornley Myers, chief executive officer of VINLEC, the state-owned electricity company, told a ceremony on Tuesday that the depot will hold 20,000 barrels of diesel, 10,000 barrels of gasoline,

The depot, a joint venture between the governments of St. Vincent and the Grenadines and Venezuela, was constructed at a total cost of US$31.6 million under Caracas’ oil initiative, PetroCaribe.

Myers said that the fuel depot is the third most expensive capital project in the history of St. Vincent and the Grenadines, after the EC$700 million airport under construction at Argyle, and the Lowmans Bay Power plant.

Work on the fuel depot began in 2007, the same year that PetroCaribe’s LPG filling station at Campden Park was inaugurated during a visit of then president of Venezuela, the late Hugo Chavez.

“It has been a long and sometimes difficult journey but he project has never suffered, due to the commitment of the government and people of the Bolivarian Republic under the leader of the eternal commandant Hugo Chavez Frias,” Myers told the ceremony, which was attended by Vice-President of Venezuela Jorge Arreaza and his wife, daughter of Chavez, Rosa Chavez.

“Their (Venezuela’s) commitment was demonstrated when he (Chavez) visited the site in 2007 to symbolically mark the commencement of the project,” Myers said.

“The plant we today inaugurate will increase the storage of diesel from 12,000 barrel to 32,000 barrels. This is 1,120,000 imperial gallons. Based on the current usage of fuel at the Lowmans Bay Power Station, this will be sufficient fuel for a period of just over three months,” he said.

“O how we have come a long way,” Myers further commented, noting that in 2000 his company had storage for just one day’s storage of fuel.

“VINLEC bought fuel every single day into its tank. In a few months, we are going to have three months of fuel,” he said, adding, “This increase in storage capacity will provide additional savings in terms of freight, cost and insurance.”

The fuel depot is located on seven acres of land, and Myers said it is built to internationally acceptable standard.

He said every effort has been made to mitigate risk and the depot has a high level of built-in instrumentation and automation with respect to its operations.

Fire and gas fume detection system are located throughout the facility and will provide visual and audible alarms in the event of any abnormal condition, Myers said.

The depot also has a 9,000-gallon water storage tank and is provided with foam generating devices to fight fires.

The spill containment plan was discussed with VINLEC and all relevant national bodies, he said.

“This is a facility for this time and for all times to come. The Hugo Chavez National Fuel Storage Facility stand as a beacon of south-south cooperation and cooperation between neighbours washed by the Caribbean Sea,” Myers said.