Airport Without a Cause 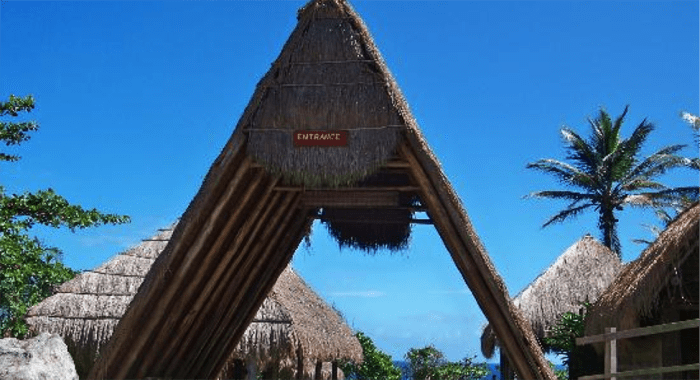 Entrance to the Kalinago village in Dominica.

For those tourists who want to do more than just laze around and enjoy the attractions at their resort, St. Vincent and the Grenadines (SVG) offers an opportunity to explore its rich aboriginal culture and prehistory via a miniature model of an early Garifuna (“Carib”) village displayed in the national library; Dominica, in turn, offers Kalinago Barana Aute, a life-size model “Carib” village spread over four acres of seaside indigenous land complete with guided tours to the various displays and buildings, cultural presentations, a well stocked snack bar, and a gift shop full of aboriginal arts and crafts. The seaside site itself features breathtaking river, waterfall, and ocean scenery.

One of our premier tourism options is a vigorous climb to the top of La Soufriere volcano, an activity which none of our regional competitors offers and which is rewarded by awe inspiring visual treats at the summit. But how can we expect hoards of tourists to accept this moderately challenging hike when they have to begin their ascent with the even greater challenge of defecating behind a bush because the toilet at the base is either locked or not working most of the time, as reported on the front page of the March 20, 2015 “The News” newspaper?

“They came from the yachts. There were … three cars and a big bus packed with people. The toilet is not working — no water in the tanks. They are empty so they cannot flush. One of the tourists had to go ’round to the back to do what he had to do …” (p. 1).

Countless examples like this, together with a comparison of our inferior and neglected tourism offerings with those elsewhere in the Caribbean, not to mention elsewhere in the tropical world, would show that we could not be further from ready when it comes to international tourism.

Whose fault is this?

Certainly not the tiny force of low-level underpaid, lackadaisical, poorly trained, and unsupervised people on the ground tasked with day-to-day site protection and maintenance. There is an ancient proverb that says, “A fish rots from the head down.” The three big fish running our tourist industry, the individuals who have failed miserably to enact and enforce the rules, regulations, and policies to make our country clean, sanitary, safe, friendly, and enjoyable to international tourists are: Glen Beache (CEO of the SVG Tourism Authority), Cecil McKie (Minister of Tourism), and Ralph Gonsalves (Prime Minister).

Ironically, these are the very same people who keep shouting that SVG has a very bright international tourism future.

Glen Beache, in particular, should be held accountable — assuming that accountability were actually a government policy in our country — for his incompetence in negotiating with the international airlines said to interested in flying here. If the statements attributed to him are accurate, including his idiotic defence of the lack of functioning toilet facilities at the base of La Soufriere (as reported in the March 27, 2015, The News newspaper), why was he not replaced or dismissed long ago? The short answer is because he is Sir Vincent’s son, hence untouchable. If his appointment to lead our tourism efforts was solely based on political patronage, as his failed performance and bumbling statements suggest, how much more evidence do we need that we could not be further over our heads with this AIA project?

A regime that cannot collect the massive amounts of back taxes owed by its citizens; cannot fix the public roads in a timely fashion; cannot enforce auto, traffic, and building regulations; cannot reverse the decay and vendor chaos in our capital city; cannot regularly clean the rivers, beaches, and gutters; cannot provide adequate public safety for our people; cannot provide proper medical care for our citizens; cannot manage a few tourist sites and resources; and cannot understand the most elementary features of the airline and hospitality industries is a regime that could never transform our country into a recognized and desirable holiday destination.

The hospitality industry is an extremely risky, volatile, competitive, consumer- and profit-driven business. This is because it is based on the spending of “discretionary income” — what is left over when basic subsistence needs for food, clothing, shelter, medical treatment, and so forth are satisfied. No better example of this is the comparison between our hospitality and grocery businesses. Many of our hotels, guesthouses, nightclubs, sports bars, and restaurants have shut down over the years, some not long after opening. Other similar business concerns are barely treading water or drowning in debt — including those of well-known and respected entrepreneur Ken Boyea — or keep changing hands. But when was the last time a major SVG supermarket went bust or was even downsized? (The Low Budget family supermarkets only went out of business because of mismanagement and reputed infighting after the founder’s death, but that was over 25 years ago.)

This is not only because people must to eat to live regardless of their wealth level. Like people around the world, Vincentians have become increasingly dependent on supermarket produce in recent decades as incomes have risen, mass produced imported foods have become cheaper (even with sky high import duties) compared to the same local produce (due to economies of scale and a lack of labour-saving mechanization), small urban grocery stores have become uncompetitive, and consumer tastes and preferences have changed. Likewise, most middle-class First World people travel overseas to stay at hotels and resorts only after satisfying their basic needs. So they stay home and tighten their belts when times are tough.

The risky nature of the discretionary-income holiday business can be starkly seen in all the red ink our Canadian-based banks have bled investing in and lending to the Caribbean hospitality industry in recent years. The Bank of Nova Scotia will certainly close shop in SVG over the next several months due to loses here and elsewhere in the Caribbean; money-losing First Caribbean International Bank (owned by the Canadian Imperial Bank of Commerce), and the Royal Bank of Canada, which only bought back the Royal Bank of Trinidad and Tobago a few year ago and is bleeding money here as well, may not be far behind.

So much for our clownish Minister of Tourism Cecil Mckie’s ignorant claim that visitor arrivals will triple to 250,000 two years after the opening of AIA. Mr. McKie should also tell us how many hundreds of people will have to be squeezed into each of our 750 hotel rooms at the same time, assuming the hypothetical addition of 200 more rooms even materialises over the next few years.

If a mild-mannered and respected former civil servant, party stalwart, public intellectual, published author, and patriotic Vincentian like Christian I. “Cims” Martin can damn the airport project with such faint praise — “… our airport is literally being built on a wing and a prayer…. even the Almighty would have had difficulty forecasting a completion date…. The completion of the airport would not resolve all our difficulties …. Whatever its advantages and disadvantages, SVG is what we have,” and so forth — in a February 27, 2015 Searchlight newspaper editorial (“The Airport and Beyond,” p. 8), we should be very worried.

If a rising ULP politician like Senator Jomo Thomas could write in his weekly The Vincentian newspaper column that, “… if the treatment meted out to [hotel] employees by some employers is any indication of what our workers can expect, growth in tourism will result in few if any real benefits redounding to the country….We build projects mainly owned by foreign concerns, where the most we can expect is low end employment for our workers” (February 27, 2015, p. 11) — legitimate criticisms of the exploitative and racialized nature of the hospitality industry that apply just as much to wealthy countries as to poor ones like our own — then all hope is lost.

Two personal anecdotes. Long ago, in my presence, a well known guesthouse-owning member of the Mulatto elite referred to two of her dark-skinned and rotund guests from Trinidad as “gorillas.” Again, in my presence, she habitually referred to her yard-boy as a “black African monkey.” It seems that nothing has changed in our racist mentality since mid-1969, the year these remarks were made. Early this year — and nearly 46 years later — a bright and articulate young female acquaintance of mine with many high school subjects who was employed in an administrative position at one of our larger hotels owned by an established white elite family with deep roots here told me that she had to resign because of the overt racism of the principal owner who baldly stated that she didn’t want black guests staying at her hotel, especially if they were from Africa. This was on top of her abusive and contemptuous treatment of an all-black staff.

With few tourists coming; with nothing to attract any more; with no room for more to stay; with no global carriers willing to land; with so many of our business people just hanging on for dear life; with some of the local hotel-owning cabal still clinging to our wicked slavery past; with our few tourist facilities neglected, mismanaged, and run-down; with no international, regional, or local entrepreneurs committed to large-scale hotel and resort development; with our Canadian-based banks afraid of piling up more bad debts, foreclosing on existing ones, even preparing to leave; and with half-hearted supporters like C. I. Martin and Jomo Thomas, AIA is an airport without a cause.

This is the eleventh in a series of 15 essays on the folly of the proposed Argyle International Airport.

3 replies on “Airport Without a Cause”