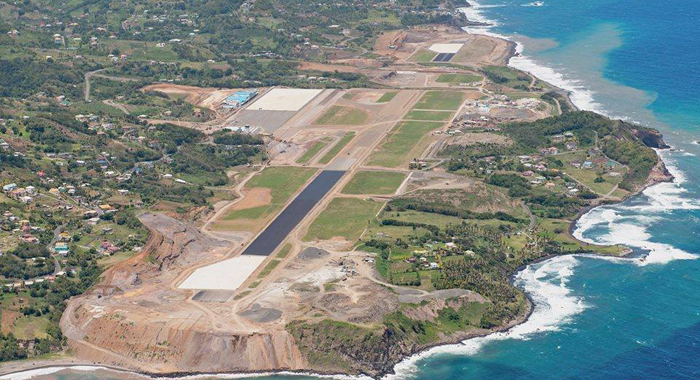 Argyle International Airport as seen in a recent aerial photo by Jonathan Palmer.

Venezuela has contributed more than US$85 million (EC$228 million) to the EC$700 million international airport being constructed at Argyle, Prime Minister Ralph Gonsalves has noted.

The oil-rich South American has been accused of not living up to a promise Gonsalves said it had made about paying the wages of Cubans working on the project.

But Gonsalves, who is also Minister of Finance, said this week that the airport project has received US$50 million in loans from the ALBA Bank at 2 per cent interest for 20 years.

“When you get money like that, it’s almost a grant,” he said at the inauguration of a US$32 million fuel depot at Lowmans Bay, built with PetroCaribe funds.

He said that US$25 million have gone into the airport from PetroCaribe, Venezuela’s oil initiative with several Caribbean and Latin American countries.

That money, including the grace period, is 25 years at one per cent interest, Gonsalves said.

He noted that Venezuela also set up the laboratory to conduct soil and other tests at the airport.

“This friendship is not only in money and men and in equipment, not only in cash and kind and in technical people, also advice and support and solidarity,” Gonsalves said.

The airport, which has been billed as the largest capital project in the history of St. Vincent and the Grenadines, has missed several completion deadlines since 2011. It is now scheduled to become operational in October.

Gonsalves, who is 69, noted the debate about when the airport will be completed.

He said that statistically, he has about five years left to live, adding that the airport is “not for this year or next year. It is not for Ralph’s lifetime”.

“I am building it for as long as SVG exists,” he said.