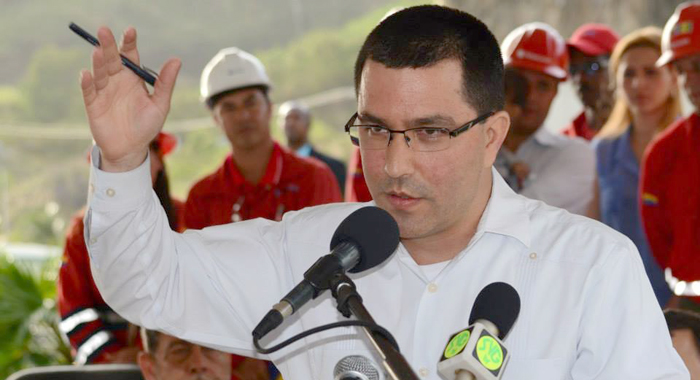 Speaking at the inauguration of the 32,000-barrel fuel depot this week, Arreaza said that Chavez taught the current leaders in Caracas that the country’s energy resources “were not only for the Venezuelan people, but also for the people of the Caribbean, Latin American and even Africa…”

PetroCaribe offers oil to participating Latin American and Caribbean countries at terms of preferential payment, with part of the monies going social development projects in those countries.

The Venezuela vice president noted that Pastor Verrol Blake, who prayed at the inauguration of the depot, had said that God takes care of the poor, weak and the hungry

“And so did our commandante Chavez. He took care of the poor the week and the [hungry] and that’s why we are here, because he was Christian; he believed in Jesus Christ and he designed his own formula to help his people, the people of Latin America, and, of course, the people of the Caribbean,” Arreaza said.

He noted that Chavez also helped the less-privileged in Africa and the United States, providing heating oil to poor African American families in the Bronx and in Brooklyn.

“We are surprised, because the president of the United States has stated that Venezuela is a threat to their national security,” Arreaza said.

Officials in Washington said, however, that the order did not target Venezuela’s energy sector or broader economy.

Arreaza said it is a “miracle” that Venezuelan oil is now benefitting the Caribbean.

He said his country’s oil was not a blessing until the Chavez-led “Bolivarian Revolution” came to office in 1999.

“… we have had a lot of oil, petroleum, [for] over 70 years, but it was not a blessing for us until the Bolivarian Revolution came into power. We didn’t know where it was invested, where the profit went.

It probably is in the banks Europe or the United States of some people who were presidents from Venezuela,” he said.

Arreaza said that in the 1980s Venezuela was selling oil to the United States, the richest country in the world, at discounted rates.

“Not with long term financing; with discount,” he said, pointing out the difference between that arrangement and PetroCaribe.

“So we were giving our petroleum, our oil to the richest country in the world as a gift — part of it. Now, when President Chavez decided that the Venezuelan oil was for the Venezuelan people and for the peoples of the Caribbean, he suffered attacks from many other countries, especially our big neighbour in the north,” the vice president said.

“But now, you people in the Caribbean are paying; this is no gift. You are doing investment with the financial formula we have agreed, and this is part of the investment and the diesel and the gasoline and the jet fuel will probably come from Venezuela also, so this is a good business for all of us,” he said.

Arreaza also said that with the EC$700 million Argyle International Airport expected to become operational this year, SVG will also need a not of jet fuel.

He also noted that Caracas has contributed to the One Laptop Per Child initiative in SVG.

“That’s what President Chavez, commander Chavez, President Maduro want. The profit, the real profit of PetroCaribe, of ALBA, is the smiles from our children, from our men and women. From the old, our grandmothers and fathers, our grandparents all over the Caribbean and Latin America.

“That’s the result, the consequence we are looking for; spiritual profit; making people happy.

“That’s what Simon Bolivar told us to do 200 years ago. To find the government system that will give people the biggest amount of happiness possible and that what we are doing today,” Arreaza said.