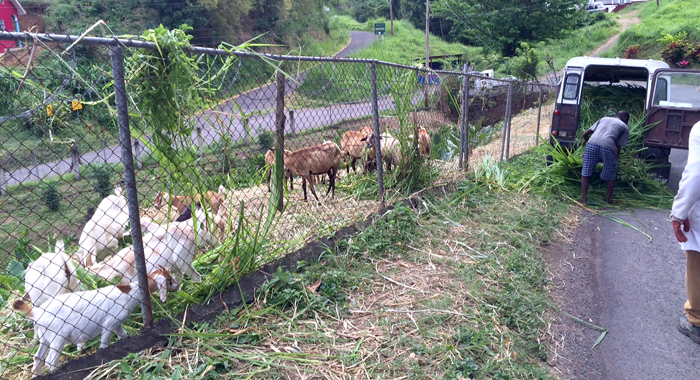 Men feed grass to a flock of sheep and goat in Penniston. (IWN file photo)

The Ministry of Agriculture is partnering with the Taiwan Technical Mission in its efforts to boost small ruminant production through a project that will see animals brought into heat an impregnated within one week.

The project, which will be fully rolled out in May, hopes to increase the nation’s sheep and goat population by 40 per cent by 2020, thereby reducing imports of mutton and lamb.

The project includes the use of female synchronisation — bringing several animals into heat at the same time — then inseminating them artificially.

Farmers are expected to benefit in that within one week, they can have several animals brought into heat and inseminated.

Amelia Jack, veterinary officer with responsibility for animal production, said synchronisation and artificial insemination would be beneficial to St. Vincent and the Grenadines in that more small ruminants can get pregnant, including animals that might have had fertility issues.

Jack, who recently underwent specialised training in Taiwan, said that not only does artificial insemination give farmers greater control over reproduction in their herds, but it is also cheaper as it is very costly to maintain a male sheep or goat properly.

“One ejaculate can inseminate up to 25 females,” Jack said, adding that the compound will be taken to farms in stray, replaying a system where sire were taken to farms or females to the Ministry’s stud stations for natural insemination.

“The end point of any production is money, business,” Chief Veterinary Officer Kathian Herbert-Hackshaw told the media briefing as she highlighted the benefit to farmers.

The Ministry of Agriculture says this leads to better planning, in that farmers can know when their animals are due to give birth and can keep better records about the sires of the various animals.

“And if you can have animals synchronised, that is, come into heat at the time when you want it, and several of them one time, it is easier to mate or service with AI ten animal than to wait for them to come on heat one by one,” Herbert-Hackshaw said.

Among other things, the project hopes to improve the available breeds for reproduction, and provide incentives to all commercial farmers to produce small ruminant and their products that can be produced locally at competitive prices.

As part of the initiative, Jack and two other veterinary officers — Natalie Toney, and Louanne Johnson — recently travelled to Taiwan, where they underwent specialised training in artificial insemination of small ruminants.

During a media briefing, Chin-Yu Lee, chief of the Taiwan Technical Mission, noted that Taiwan handed over to the pig and chicken production projects to the Ministry of Agriculture in 2005.

He, however, said there are still potential and issues with animal production, hence the small ruminant project, which was conceptualised in 2010.

Lee said that their evaluation found that small ruminant is a very good sector for growth and development in St. Vincent and the Grenadines.

He said that feed for pig and chicken has to be imported, but grass grows very well in SVG, making the cost of feed for small ruminant very cheap, or almost zero.

The small ruminants project included upgrade of the lab at Rabacca; the visit to SVG Of a Taiwanese expert to evaluate the industry, including meat processing; procurement of equipment; and the training of staff.

Lee said the progress of the project has been “a little slow” because the programme was designed to ensure that the lab space is available, equipment procured and material available, before the training of the veterinary officers in Taiwan.

Another important component, he said, was the procurement of Nile grass from Taiwan, which will be used as more nutritious fodder for small ruminants.

“So that means that most of the components in the industry is ready to start,” Lee said.

He added that the project has also received support from the Taiwan Government and the European Union Banana Accompanying Measures to import 100 heads of pedigree animal.

“So we hope that soon St. Vincent is a main small ruminant exporter in the region,” Lee said.

Herbert-Hackshaw told the media that SVG has some pedigree sheep and goat because the Ministry has been importing, breeding and reproducing pedigree animals and have a system whereby pedigree weaners were sold and sires were loan for reproduction in small populations.

“But although we have all those things, we need to get a quick induction in the population of pedigree animals and we needed that by artificial insemination,” she said.

Toney, a field officer, said that her three weeks of training in Taiwan focused on the collection and processing of semen, and the technique of artificial insemination in small ruminants.

“What we brought back is the technical skills to train our co-workers. So, maybe in a six-month period or so, everybody in Animal Health and Production Division should be efficient enough to carry out the service to the farmers,” she said.

Toney said the artificial insemination service will be offered to farmers at a cost.

She said that artificial insemination is “an expensive procedure” but the cost to farmers ”would not be any cost that the farmers would not be able to manage”.