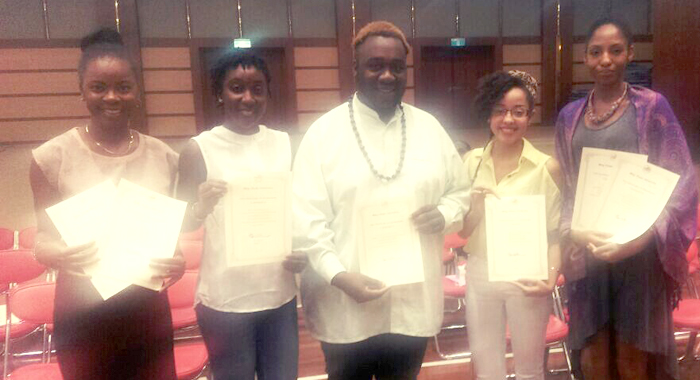 The 26th edition of the activity saw Jean Karlos Almonte of the Dominican Republic receiving an award for outstanding performance in the film category for his short film “Balloon at MCU”, a video he made along a Taiwanese friend.

The other big wins for the Caribbean came when five other students — Keryn Nelson and Deja John of St. Lucia, Shennica David and Trel-Deen Lewis of St. Vincent and the Grenadines and Donya L. Francis of St. Kitts and Nevis — outshined the other participants in the English writing section to win individual prizes.

The English section of the competition was divided into two categories: poetry and prose.

For the poetry category, individuals were allowed to submit pieces on a topic of interest. The submitted poems carried different themes, such as lust and love, nature, freedom, history and lifestyle.

John’s “Tiffany’s” received NT$1000 for her outstanding performance. John, who is a 4th year international business and trade student, has participated in this competition three times and has received awards each year.

Limited to the topic “Taiwan and Me”, students were encouraged to submit pieces for consideration in the prose category.

This caught many students off-guard, as explained by the finalists.

Over the years, the students were able to choose any topic to write about, but this year was different.

This did not stop the five students from participating.

The students have been living in Taiwan for various periods of time and the topic encouraged them to express their feelings and to speak of their experiences.

Nelson, a third-year journalism and mass communication student, was announced as the overall winner of this category.

She wrote of how Taiwan and St. Lucia share many things in common and of her experiences in a foreign land.

The prizes for this category were awarded as follows:

Over 300 Caribbean students are enrolled in various academic programmes at universities in Taiwan.

These students hail mainly from St. Lucia, St. Vincent and the Grenadines, St. Kitts and Nevis, Haiti, the Dominican Republic, and Belize.

The students are benefiting from scholarships as a consequence of their countries’ diplomatic ties with this Asian nation.