Dalpin moves from ‘Behind A Bumper’ to behind the cross 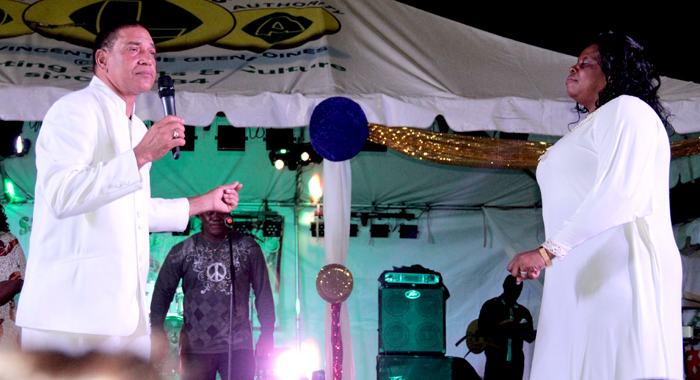 When former calypsonian Felix “Dalpin” Findlay performed at Victoria Park last week Sunday, it was his first appearance at the venue since 2009, and the first time that he was singing gospel music instead of soca there.

Dalpin, whose “Behind a Bumper” some people still believe up to today should have won the road march title a decade ago, is no longer singing calypso of the type performed at Victoria Park during Vincy Mas.

He is now a born again Christian, who, along with his wife, former calypsonian Monica “Valley Dove” Findlay, are joined in evangelism.

“One of the inspiration about it is that my wife is in the ministry and if you have a family, just as if we don’t pray together it would not work,” Dalpin told I-Witness News of his move from “Behind the Bumper” to behind the cross.

The Findlays, who are based in Toronto, Canada and the British Virgin Islands, spoke to I-Witness News on the sidelines of the Gospel Fest National Showcase on April 26, where they were among the guest artistes.

Dalpin’s last performance at Victoria Park as a calypsonian was in 2009, when he sang “Don’t Hold Me Back”, featuring Icon in the Ragga Soca competition.

His wife left the artform since 1998, and her songs included “Predicament”, “Vincentians Love Sun”, “Put The X”, “She Came Down From Canada For The Carnival” and “Proud To Be A Vincentian”.

“Before I started singing calypso, I was a churchgoer,, but I wasn’t deeply involved in it. I used to sing in the choir, but I wasn’t serious as a little girl growing up,” Mrs. Findlay told I-Witness News.

But when she migrated to Canada, she “got more involved in knowing Jesus, getting more closer to him every day and meeting people who encouraged me in serving him,” Mrs. Findlay said.

“One day I just sat down and decided that this is the better way, because with serving Christ, you cannot lose,” said Mrs. Findlay, who did not capture any of the titles in her calypso career.

“For 15 years now, I have been a praise and worship leader in Toronto, Canada and the ministry is going very well, and I prefer singing for God rather than the way I was doing it before,” said Mrs. Findlay, who worships at New Life Ministry Pentecostal Church.

The couple is preparing to release their first gospel album, “Raise Your Voices”.

Speaking of his move to Christian ministry, Dalpin told I-Witness News that over the past 16 years he has noticed a change in Vincy Mas.

“It is not like the oldie goldie type of songs. It is jumping and winding and raving and wet you down. I’ve never been into what is happening today,” he said.

He, however, explained that his mother, who died 11 years ago, had always told him that he will one day lead her congregation at New Baptist Church in Fountain, which his sister now pastors.

“That was one of the main reasons, and then seeing what is happening today is something,” Dalpin told I-Witness News.

“I would not stop singing calypso, but [will sing] calypso that is righteous, calypso that is meaningful, not about political this and that, but universal themes — the environment, these are things I have songs about,” he told I-Witness News.

Among this type of calypso, he mentioned “Hear The Cry”, a song about a mother whose only son was shot and killed by a gang, and a child who lost his mother to HIV/AIDS.

“The same way I sang ‘Behind A Bumper’, I can sing behind Jesus. That’s how I look at it … Whoever wants to go out there and sing and do their bumper thing, that’s up to them. For me right now, I am concentrating more heavily on serving Jesus, because, without him, we are nothing. … I know God is real, so, therefore, I am going to stick to that,” Dalpin told I-Witness News.