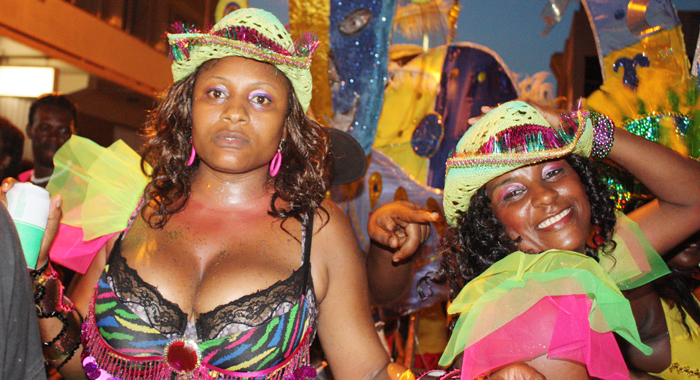 Vincy Mas 2015 will be officially launched this evening at Victoria Park and carnival planners have promised that the change in venue will not reduce the fun associated with the launch of the festival.

It will be the first time that the launch will be held at “Carnival City”, rather than Solidarity Car Park in the heart of Kingstown, which has been home to the launch of the festival.

“We are going to be even more innovative in the presentations, with restructuring of the programme,” chair of the Carnival Development Corporation, Dennis Ambrose told a press conference this week.

“We believe this will bring out more families and more participants as well as more onlookers viewing the special parade coming from uptown to the Victoria Park,” he said.

The venue for the launch of the festival was changed because of logistical and security considerations encountered in the past.

Ambrose said that when the launch was held at the car park, the large crowd often spills onto Bay Street and that was a concern for the CDC.

The CDC’s Coordinator of Shows, Marlon Stephenson, told the media that today’s launch will begin at Heritage Square at 11 a.m. with activities continuing until 3 p.m.

There will be pan music, calypso, performances by the 2015 Junior Calypso and Soca finalists and, among other activates, ring games.

“Carnival is about culture and we are doing things to attract persons,” Stephenson said.

Heritage Square will also feature traditional mas characters “to educate persons” and there will also be dancers, and a marching band from the C.W. Prescod Primary School.

Activities for the children include a bouncing castle and face painting and Stephenson said the events will be “an exciting package”.

This year also, there will be a parade dubbed “Celebration Train”

that will leave Heritage Square from 4.30 p.m. for Victoria Park.

The parade aims to celebrate the winners in Vincy Mas 2014 and will be led my Miss SVG 2014 Shadeisha George, while winners of the various competitions in 2014 (Kaiso, Ragga Soca, Soca Monarch, Mas Bands, etc.) are also expected to take part.

The march will also consist of floats of major sponsors, LIME, LOTTO and Hairoun.

There will be pan music, masquerade bands, j’ouvert bands, Monday bands and the Miss SVG 2015 contestants.

The parade is expected to arrive at Victoria Park at 7 p.m. for the official launch of Vincy Mas, where patrons will hear speeches from Ambrose, Minister of Culture Cecil McKie, and representatives of the various sponsors.

Persons will be entertained by pan music and will witness the first official public appearance of the Miss SVG 2015 contestants while they will also see the 2015 masquerade and j’ouvert bands’ productions.

The Best New Songs competitions will also be held and after the launch activities the LIME Soca Dans will entertain the gathering.

“We are making sure you are entertained. Please come out and witness this spectacle. The launch of Vincy Mas is going to be spectacular,” said Stephenson who added that LIME’s involvement means a spectacular show while the new venue gives room to do different things

“The shows committee this year is very energetic and revived and we want to make sure that this year we put on spectacular shows,” Stephenson said.

Marketing Co-ordinator at the CDC, Anthony Dennie, said that the launch will bring together all the players of Carnival, adding, “It is going to be quite a spectacle”.

He said that apart from the LIME Soca Dans (Shaunelle McKenzie, Luta and the Fireman) and LIME DJs, the artiste “Big Red” of “Shell Down” fame will also entertain the crowd.

The launch will also include whistle stops on the Leeward and Windward sides of St, Vincent.

DJs from Hitz FM will entertain on the Windward side while XTreme FM DJs will work the Leeward end.