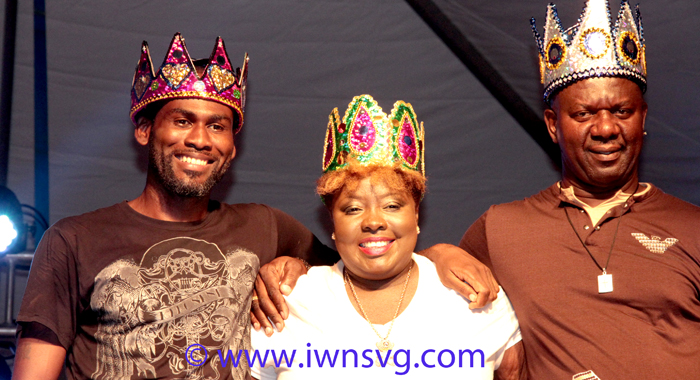 “If yo’ trying to save money to buy a house or a minivan/You in for a jam once you have a 3D woman.’

With that message, calypsonian Kingsley “Hero” Roberts won his first crown for Vincy Mas 2015 when he copped the Calypso segment of the Best New Song Competition on Saturday.

The competition formed part of the launch of Vincy Mas 2015, a spectacular even at Victoria Park, which saw all of the components of the festival (mas, pan, calypso and pageantry) on display.

(Scroll for more photos of the launch)

Robert’s social commentary might have made some patrons and a major sponsor of Vincy Mas, the National Lotteries Authority, uncomfortable.

“They does spend all they money buying Lotto and 3D/ They would spend every dollar trying to buy every number…” the bard sang of the 3D women in the Carl Williams composition.

Also winning crowns on Sunday was Aurella “Kahalia” Beach, who topped the Ragga segment of the competition with her song “Do Supmn”.

It was the first time that the launch of Vincy Mas was being held at “Carnival City” (Victoria Park) instead of Solidarity Car Park on Bay Street.

Chair of the Carnival Development Corporation Dennis Ambrose said that the new format has “a whole lot of new vibes”.

Among other things, the launch included “Celebration Train”, a parade of elements of Carnival from Heritage Square to Victoria Park.

“Each year, we plan and hope for this event to be bigger, and better. And this year, thanks to Carnival lovers all across the country, you are making this a reality!” he said.

“Many persons are anticipating that Carnival 2015 is going to be a Carnival to remember, and the CDC intends to make that a reality.”

Ambrose reminded patrons that the nation is celebrating 50 years of Queen of the Bands and 30 years of Miss Carival, the regional pageant that forms part of Vincy Mas.

“So you know we have a lot to show for such a record,” Ambrose said.

“Already, we are hearing the early releases of soca and calypso — and they are hot. And, I can assure you that there is much more to come,” he said.

Ambrose told patrons that the mas components are busy in their tents making and displaying the numerous costumes for all sections of their bands.

“Please go to the tents, look at the costumes and sections, and sign up early so that you can get the costume of your first choice.”

He further pointed out that the CDC is this year working together with telecommunications provider, FLOW “as we take much of Vincy Mas to the wider Caribbean.

“This will be a spectacular experience for patrons in the neighboring islands. I believe, that this will put them in preparation mode for next year, in the event it’s too late to make travel arrangements to be here for Vincy Mas 2015,” he said.

He said rural CDCs continue to play an integral part in keeping the momentum following the launching of Vincy Mas.

“We are asking you all to support as many of these events as possible,” Ambrose told Carnival lovers.

There is a lot of talent which will eventually make it to Carnival City, but you can capture those acts in their early development in the rural programmes,” he said.

He also pointed out that the calypso tents will rollout from May 20, adding, “we are looking forward to your strong support at these events”.