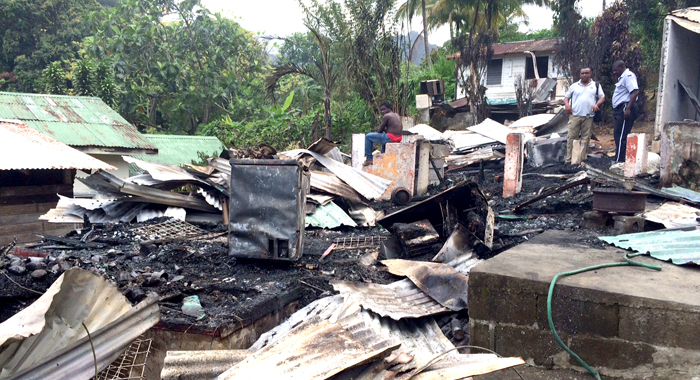 Police officers at the scene of the fire in Francois, Vermont Sunday morning. (IWN photo)

A Vermont man will have to start again from scratch after fire destroyed his home and business during the predawn hours of Sunday morning.

Nathaniel Ollivierre, also known as “Marks”, “Record”, and “LP” of Francois, Vermont lost his three-bedroom wood and concrete house, along with his shop and another building on his compound in which villagers played dominoes.

Ollivierre was not available for an interview when I-Witness News made multiple visits to the area.

One of his brothers, Leslie Peters, also of Vermont, told I-Witness News that Ollivierre was taking some time out to contemplate his loss.

Peters said that Ollivierre told him that he had returned home from Kingstown shortly before the fire was discovered, sometime around 3 a.m.

He said Ollivierre had got some food from another neighbour and was eating it in the house when he heard what he described as the sound of someone walking in the yard.

When Ollivierre looked through the kitchen window, the house was on fire, Peters said, adding that the efforts of his brother and other residents to contain the blaze were fruitless.

“Shop, everything, everything gone. I feel it because he’s my brother,” Peters told I-Witness News.

He said his brother believes that someone might have set the compound on fire.

Ollivierre’s house is the second destroyed by fire in Vermont this year.