NDP to kick off election campaign with mass rally 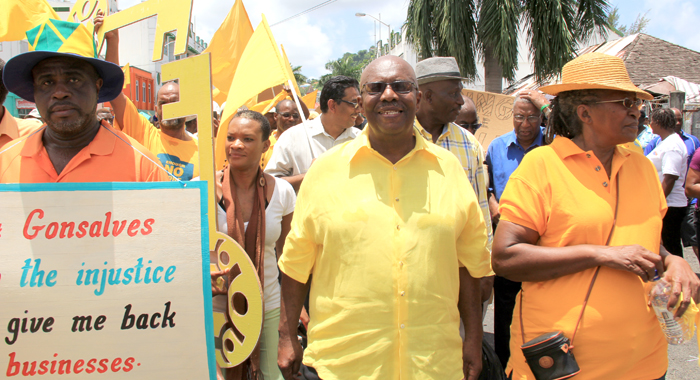 The main opposition New Democratic Party will kick off its campaign for the next general elections with a mass rally at Sion Hill on Saturday.

“We are taking this as a sort of swing off in terms of elections,” Leader of the Opposition and party president, Arnhim Eustace told listeners to his weekly radio programme.

The event will begin with a candlelight march from the party’s headquarters on Murray’s Road to Sion Hill.

“It’s true we have been going house to house but we need to get some rallies going, and significant rallies, not just small meetings in a constituency, but significant rallies to attract a lot of people,” he said of the party’s campaign efforts.

General elections are constitutionally due in March 2016 but are widely expected this year.

“We expect to bring people up to date on what is really happening in our country, what is happening with the airport,” Eustace said of the EC$700 million international airport under construction at Argyle.

The airport has missed several completion deadlines since 2011 and is now scheduled to be operational by October.

“We are busy working on the programme. … We are getting ourselves ready,” Eustace said of the rally, adding that the party will have a meeting today to finalise the programme.

“What we really want to concentrate on though is to tell people what the NDP is going to do for them,” he said.

“We expect a very big turn out at the rally, and, as I said, the concentration is going to be what the NDP is going to do when elected. And the various speakers at the rally will have to concentrate on the particular areas for which they have responsibility in their own presentations. I am looking forward to that. It’s the first big outing we are having for some time and I want to treat it with the most utmost seriousness.”

The NDP, which governed St. Vincent and the Grenadines from 1984 to 2001, is hoping to retake the reins of government after three terms in opposition.

“I have no doubt in my mind that the tide is swinging to the New Democratic Party,” Eustace said.

“I have no doubt about that in my mind. What we have to ensure is that fraud is not in that tide; that people are being registered where they should be registered and put on the list where they should be put on the list and not have people in an area voting twice or people going to different areas,” said Eustace, adding that information suggests that up to 250 persons might have voted more than once in the December 2010 elections.

The Unity Labour Party was returned to office for a third consecutive term in December 2010 by a one-seat majority.