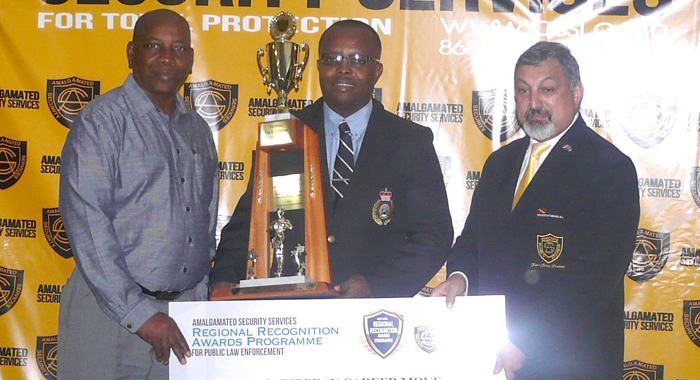 Nanton, who is in charge of the Royal St. Vincent and the Grenadines Police Force (RSVGPF) Public Relations and Complaints Department, received the award at the 30th Annual General Meeting and Conference of the ACCP Tuesday in St. Kitts.

Assistant Superintendent of Police Mashama Sealy of St. Lucia placed first runner-up in the Top Caribbean Career Move Officer Award category. Inspector of Police Trevor Bailey of St. Vincent and the Grenadines placed second runner up in the Top Crime Fighter Award category, which was won by Inspector Eddie Monlouis of St. Lucia. First runner up in that category was Constable Milawn Frank of Grenada.

An elated Commissioner of Police, Michael Charles, whose officers received three of the top awards, collected on behalf of Bailey and Billy.

Nanton said he sincerely thanks Charles for nominating him for the award, as well as the other Commissioners of Police for the support that they have given to him since joining the Police Force on in August 2012.

“I am most grateful to the Government and people of St. Vincent and the Grenadines for the opportunity to serve my country. Moreso, I will like to immensely thank my wife, Malika Nanton and children for their love and support as well as Superintendent Kenneth John for mentoring me all the way and Corporal Rochelle Smith for being a tower of strength,” Nanton said.

“I will also like to thank Station Sergeant Junior Simmons and every member of the rank and file of the organisation, who has provided me with support,” he added.

Nanton was recruited into RSVGPF at the rank of inspector under the Organisation’s Graduate Entry Programme, an initiative that enables suitable qualified members of the public to be recruited into the organisation at a particular rank.

With his expertise in public relations and media relations, Nanton was placed at the Public Relations and Complaints Department as the second in command.

Inspector Bailey is a 24-year veteran of the RSVGPF. He was enlisted in November 1990. At the conclusion of his initial training at the Old Montrose Training School, he was adjudged the Best Recruit for placing first on the training course. From that time to the present, he never relented in his quest to be an efficient law enforcement officer.

At his nomination, he was attached to the Criminal Investigations Department (CID) for 20 consecutive years and headed the Major Crimes Unit (MCU).

Bailey is one of top detectives in the RSVGPF. His deep passion for investigations is unsurpassed by few in the organisation — and this has easily made him one of the most effective, reliable and recognised police officers in the country.

Corporal Billy has been a police officer for over 12 years, having been enlisted in October 2002. He excelled during his initial training at the Old Montrose Police Training School and placed second overall at the completion of his training course.

After graduating from Training School, Billy was deployed to work at the Fire Department and was later transferred to the Headquarters of the Criminal Investigations Department (CID). After working for five years at CID, in 2007 he was transferred to the Chateaubelair Police Station as the detective for that District.

During this stint, he got involved in the philosophy of Community Policing in a real and personal way.

A panel of international judges was recruited by Amalgamated Security to review all nominees.