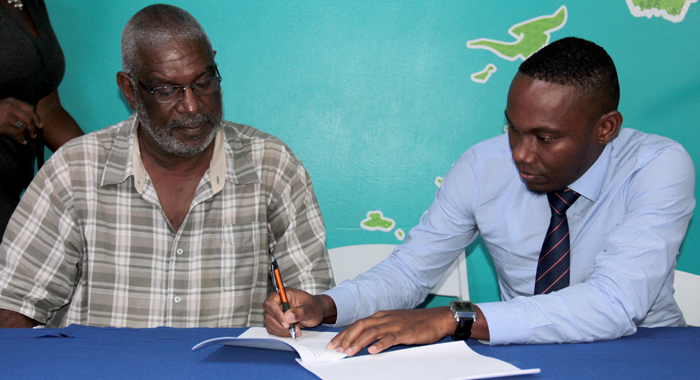 Telecommunication provider LIME and the Carnival Development Corporation (CDC) have signed a new two-year sponsorship contract for 2015 and 2016 that will see LIME streaming carnival shows live, sponsoring a Miss SVG contestants, and among other things, providing free Internet at carnival shows.

Chair of the CDC, Dennis Ambrose, said that the contract comes with a list of benefits, adding that the streaming of the shows is worth EC$40,000.

“The overall contract value at this point in time, I cannot give you the full assessment of this. But I can say it is quite lucrative,” he told reporters.

“I am excited about it, and perhaps later on the CDC will be more willing to reveal it after we have made a complete assessment. I don’t want to give you a sum and it is not the total sum, because it has other values like the sponsorship of the Miss SVG contestant. That is rewarding as well. As you know, each contestant is sponsored to the tune of about $6,500 and the sponsor usually add to that,” Ambrose said at the signing ceremony.

“So it is not just what is written, the agreed sum, and perhaps when it is all quantified, I can give you a better answer,” he said in response to a reporter’s question.

Ambrose said the CDC’s partnership with LIME is an exciting one, adding that the launch of Vincy Mas 2015 proves this.

“It was a magnificent launch and this was powered by LIME. So our association with LIME is bringing dividends, it is bringing great excitement,” he said.

He said that LIME has been working along with the CDC and many of its components to ensure the success of Vincy mas.

“Now, we have so many Monday bands and so much excitement on board. And this is one aspect of our carnival that is very unique and so I must give them some bit of credit for that,” he said.

Speaking at the signing ceremony, acting Manager of LIME Wayne Hull said his company is pleased to be a super platinum sponsor of Vincy Mas.

“Our support and commitment to the development of culture in St. Vincent and the Grenadines remains extremely strong … I can announce that we have reached an agreement with the Carnival Development Corporation which will further expand LIME’s contribution to VINCY Mas in 2015 and beyond,” he told reporters.

Hull said that Vincy Mas is an important festival that his company believes celebrates the nation’s past and offers great promise for the future as a country and to the tourism product, in particular the creative arts and further economic development.

“And, as you know, anything that Vincentians can come together and celebrate and have clean good fun, LIME is really proud to be part of that and will continue to do so in the future,” he said.

“We are extremely excited by this opportunity to showcase our products here at LIME, both to our customers, our potential customers, as well as the general public in St. Vincent and the Grenadines. We have a set of fantastic products and services. And I don’t think any telecoms operator can boast of the most up-to-date technology that LIME offers,” Hull said.

At the event, the company also announced sponsorship deal with components of Vincy Mas and private events that form part of the festival.