Eustace doubts Argyle airport will be finished by 2020 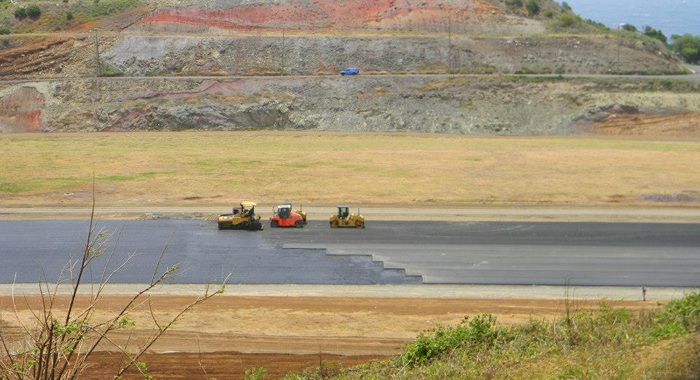 Workers are almost mid-way with the placement of the first layer of asphalt in the 2nd kilometer of the runway. (Photo: Friends of AIA/Facebook)

Leader of the Opposition Arnhim Eustace has cast doubts on whether Argyle International Airport will not be completed before the end of this year or before 2020.

The EC$700 million airport has been under construction since 2008 and has missed several completion deadlines.

The government says it will become operational by October of this year.

“I am telling you, when this next election done, another one will come before the airport open,” Eustace told the launch of the New Democratic Party’s (NDP) campaign for the next general elections.

General elections are widely expected this year, ahead of the March 2016 constitutional deadline.

If Vincentians go to the poll this year, the next elections will be due in 2020.

Eustace said that the airport has been a matter of “grave concern” to the New Democratic Party.

“We are not opposed to building an airport. We want an airport built cost effectively, with proper contractors and so on to minimise the cost. Our airport will cost eventually more than one billion dollars,” Eustace said at the rally in Sion Hill.

The government, in its latest revision, said the airport will cost EC$700 million, but Eustace expressed doubt about the accuracy of that figure.

“We have had the studies done, it will cost more than one billion. All this talk about airport opening in 2015 is a lot of crap. We know it cannot happen; we know it cannot happen. The amount work that is left to be don there is unbelievable,” he said, adding that the fuel facility is yet to commence and will cost EC$32 million.

“The fencing ain’t build yet. If the runway is going to be 9,000 feet, the fencing has to be more than 9,000 feet, and you have to do both sides, … and the short sides. That can’t done in a year,” Eustace told party supporters.

“So, all this talk here is a lot of nonsense. The question here is not whether you support the airport. We will support an airport but we are not going to support the nonsense involved, because the cost becomes so expensive that in the end the airport can’t make any money, and you have to subsidise it, put tax payers money all the time to keep it alive,” the former prime minister said.

Eustace said that in the early days of the construction of the airport, Prime Minister Ralph Gonsalves had said a company from Malaysia to manage the airport, but has since said that it will be managed by a government company.

‘They can’t run nutten,” Eustace said of the Gonsalves administration.

“And it will be worse, because anybody who takes over the airport now, you have to keep the debt and give them the airport, or it can’t be profitable the way it is now,” he said.

Eustace said Gonsalves gave an example of such a situation when he borrowed EC$100 million to invest in the National Commercial Bank before selling the majority of the shares.

“We want the airport to be built, but built properly and within cost but the cost going up and the thing is being delayed, it can’t open.

Eustace has said that an NDP administration will complete the airport, saying that too much money had already been invested in the project for it not to be completed.