NDP says it will implement ‘SOS Framework’ for sports 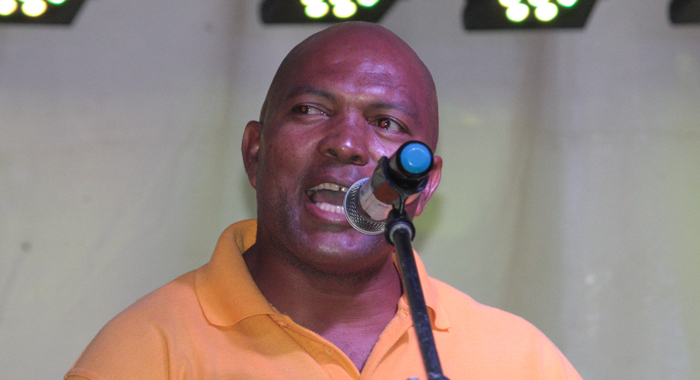 Stephenson said that if the NDP wins the next general elections, he will be playing a pivotal role in the development of sports in St. Vincent and the Grenadines.

He noted that he has participated in various sports, adding that SVG had done extremely well in sports, including netball, football, cricket, athletics and volleyballs, until the advent of the Unity Labour Party administration

“St. Vincent and the Grenadines was a force to be reckoned with,” he said, adding that sports died “an untimely death at the hands of the Unity Labour Party and that is why we in the New Democratic Party have developed what we call SOS Framework.”

Stephenson told the crowd in Sion Hill at the launch of the NDP’s election campaign on Saturday that SOS means “Service, Opportunity and Support”.

He said the NDP has a support system that will allow athletes to use sports to earn a living and get an education.

“We in the NDP do not think that sports is for sports; you are not going to play the game just for the love of the game, but we are going to give it the premium it deserves. We are going to give it the kind of impetus so that you the young people of St. Vincent and the Grenadines will be given top-class, state-of-the-art facilities so that you can have an opportunity to excel and to be the best you can be, to be the person that the Unity Labour Party would have denied your parents over the past 14 year,” Stephenson said.

He said sports facilities across the country are rundown, adding that while his colleague, Kenroy Johnson, the NDP’s candidate for North Central Windward, said there are two quality playing fields in that constituency, their budgets were never seen by lawmakers.

“Yes, those playing fields never entered the Estimates of St. Vincent and the Grenadines,” Stephenson said, adding that at the same time, the playing fields in Cumberland and Penniston are taking a long time to complete.

“That has been a campaign issue since 1998, and up to today, organised sports cannot play there,” he said of the sporting facility under construction in Penniston.

Stephenson said that the NDP will develop at least one facility in each constituency at which regional competition can be played.

“And that facility will be properly lit, enclosed and have the facilities of change room and stands and so on.

“That is what we are offering to you the people of St. Vincent and the Grenadines, the youngsters, so that you will have an opportunity to perform and to perform well.”

He said Vincentian athletes are not performing because the ULP government is not concerned about the welfare of the nation’s youth.

“It has been a government that has promised so much to you, the citizens of this country but has delivered so little. And we in the New Democratic Party have always said that there is precious little to look forward to by voting the Unity Labour Party. So what we are saying to you, give the new Democratic Party an opportunity and all your dreams and aspirations will become a reality.”

He said that the NDP built many hard courts over the years, and some of them were enclosed.

“Today, they are all run down, save and except Arnos Vale and Nutricia. Why is that so? Because we have a government in St. Vincent and the Grenadines that does not care about sports and the development of sports and the potential that is in sports to give young people an education and to allow them to gain a living through sports.

“We in the New Democratic Party will change all of that, and we will give sports the kind of impetus that it really requires to ensure that you can participate and compete,” Stephenson told party supporters.

He spoke of the National Lotteries Authorities, saying that while it was established to support sports and culture, it has diverted from its core values and objectives.

“So we are saying to you, if you want the whole system to be cleaned up, if you want sports to be on a better footing, you need to vote the New Democratic Party,” Stephenson said.

He said an NDP administration will use the NLA to help to fund sports association.

Stephenson also pointed out that after 14 years, the ULP administration is yet to build a national stadium.

Stephenson said he has the links in the sporting world to make the national stadium a reality.

“I, your humble servant, am well positioned and I know a lot of people who can bring that facility to St. Vincent and the Grenadines,” he said.

“All that we are asking you to do is trust us with your vote; invest your future with the New Democratic Party and we will ensure that that investment pays dividend,” he said of the party’s policy on sports development.