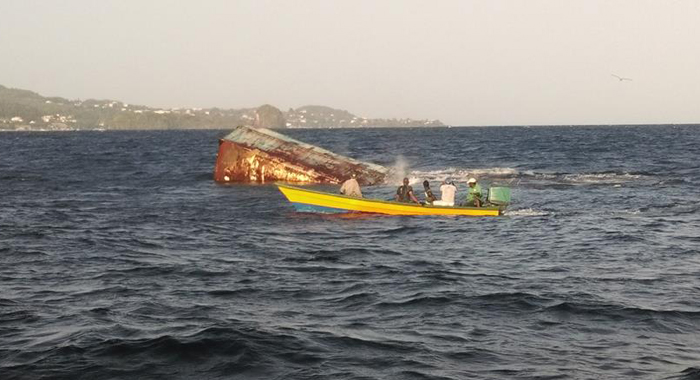 The wrecked Carla Marina was sunk in the Bequia Channel. (Photo: Camillo Gonsalves/Facebook

Bert Williams, a businessman and property owners at Canash Bay, says he is pleased with the removal of derelict boats, which had been an eyesore for years at the once popular picnic spot.

The boats were removed last weekend under the supervision of the Maritime Administration, a government agency.

“I am extremely grateful. It is like a heavy burden has been lifted off not just me, but all the business people around here,” Williams told I-Witness News.

“They are very excited about it. In fact, there have been crowds of people coming down here on a regular basis and expressing their pleasure at having the boats removed. The bay has been completely transferred,” Williams said.

Williams says he feels that the beach has now regained the status it held before the boats were abandoned there.

“I remember one time when they had the Fisherman’s Day competition, this was really the spot. It was attracting more people because of the location. They can have that here again. It’s really a total transformation,” he said.

The “Carla Marina”, which was the largest and most prominent wreck at the beach, was brought there almost a decade ago.

After being removed from Canash Bay last weekend, it was towed out to sea and sunk in the Bequia Channel.