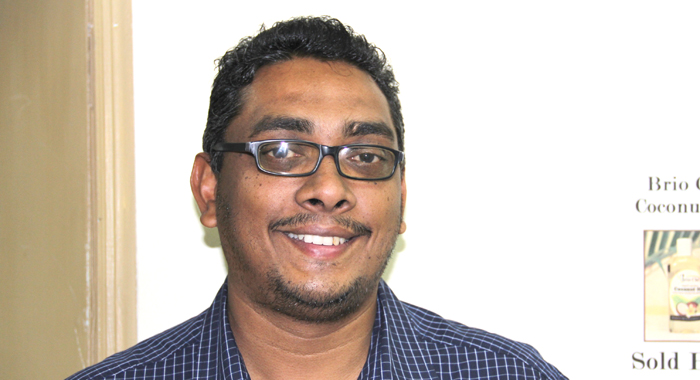 The opposition New Democratic Party’s (NDP) candidate for Marriaqua, Curtis Bowman has condemned the stoning of a party fundraiser in Richland Park on Saturday but stopped short of saying it was politically motivated.

Bowman and his family, including his children, ages 4 and 7, were at the event when the stoning took place and one of this children was almost struck by one of the missiles, he told I-Witness News on Monday.

Grounsdman Patrick “Tall Boy” John was injured by one of the stones, and a visitor to St. Vincent was struck on the hand.

Bowman told I-Witness News that the incident occurred around 7:30 p.m. as his family came to the food stand to buy food.

“I was under the shed where the food was being served and I heard bang! Bang!

“Persons started running, dispersing from the area and then when I came up, I saw Tall Boy, as he is known, … I saw blood coming down his face. I asked him what happened and he said one of the stones that was fired from up on the hill … out of his dark [struck him].”

John told I-Witness News separately on Monday that he received a minor injury to the head, but bled a lot when he was struck.

Bowman, a pharmacist, assisted John and also reported the incident to the police, who collected the stones as part of their investigation.

“Because of that incident the whole atmosphere of the function changed. Persons were walking around with their hands on their heads, because we didn’t know when another stone would be fired. When the guys got his head chopped, my two children where outside right next to him and my wife, and she was so scared,” Bowman said, adding that his wife left the fundraiser after the incident.

“If that stone had caught one of my little children, that four-year-old, she might have been dead today or critically something in the hospital.

Asked if he thinks the incident occurred because the fundraiser was a political activity, Bowman told I-Witness News, “To be honest with you, I do not want to brand it as that.

“I would not comment on that aspect right now until I see how the investigation goes. I would not say it is political or non-political, but our function was a political event, an NDP function,” Bowman told I-Witness News.

“So I don’t know if that triggered off anything from the persons who threw the stones, but what I want to say is that I am condemning such action. From a national perspective, from a political perspective and as the NDP candidate for Marriaqua who will be contesting the next election, I want to call on all Vincentians, and all residents or Marriaqua, let us refrain from these kinds of actions and let us have a peaceful campaign,” he said.

Prime Minister Ralph Gonsalves has said he will call the general elections this year, ahead of the March 2016 constitutional deadline.