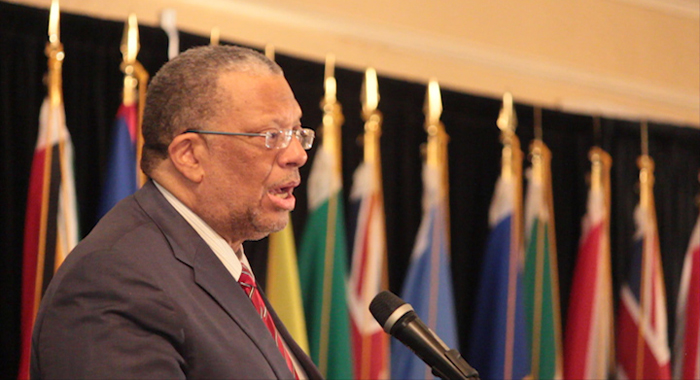 “There is also a peculiar situation that the small island states of the Caribbean face that needs to be explored further. It is true to say that despite their ‘middle income’ designation, the vulnerabilities of the region resulting from small size, narrow resource base of most if not all of the countries, exposure to climate-related hazards have led to economic underperformance that is greater than in other ‘middle income’ countries,” Peter Phillips told the closing of the two-day 45th meeting of the CDB Board of Governors on Thursday.

Phillips, who is Minister of Finance in Jamaica, further said that the Caribbean region has been most severely impacted by the 2008 global economic crisis, adding that the effects of that crisis have been “most prolonged”.

Phillips told the closing session that it must be recognised that many Caribbean countries “will not be able to achieve faster growth and sustainable development and will not be achieve to achieve the targets for the Post 2015 Sustainable Development Goals if the issue of the debt overhang is not addressed.

“We hope that the world community would join us in the dialogue about this issue,” he said, adding, “The fact is, however, that in the absence of some programme of international support the small vulnerable relative undiversified economic structures of the Caribbean States are likely to be overwhelmed by the risks inherent in a global economy still suffering the effects of the global crisis of 2008.”

He said that solutions must be found to address the problem, which, he said, makes the task of rebuilding Caribbean prosperity tremendously difficult.

“I suggest that interaction with the international community should take place more consistently with a view to developing alliances and devising workable solutions and initiatives to address this problem.

“The influence of the Bank in advancing the plight of the Small Islands Developing states in the Caribbean will have to be brought sharply into the frame of reference of the political authorities not only in these countries, but with our other partners.

“Without this, I daresay, we will lose the social consensus that has been forged in countries across the region and which has contributed to the stability and democratic traditions that are evident in the region,” Phillips said.