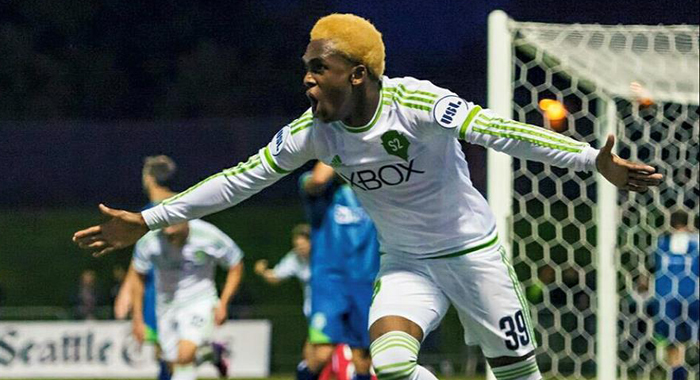 St. Vincent and the Grenadines Under-23 footballers will engage their Dominican counterparts over two legs at the Arnos Vale Plying Field on Friday (today) and Sunday.

The two legs will be played after the Dominica Football Association, made a request of the SVGFF to host their fixture owing to international cricket engagements slated for that country over the next few weeks, President of the SVGFF Venold Coombs told a media conference in Kingstown.

The match at 3 p.m. Friday will be the away match for SVG with the Sunday fixture also from 3 p.m. set as their home match, Coombs pointed out.

The SVG team will be under the guidance of senior coach Corneilus “Jose Wales” Huggins with Wade “Elbir” Jackson, who has been working with the team in his absence, the assistant coach.

Jackson said that he was confident of the team doing well over the two legs as they have been undergoing serious preparations and added to that is that eight of the players who returned with the senior team, which won the Windwards Tournament, are eligible to be part of the team’s U23 unit.

He is also mindful that following the compelling performance of the senior team in winning all three matches at the Windwards tournament that some of the players may be suffering from “a bit of tiredness” but is confident that they will be ready for the task ahead.

“Yes, we have discussed the possibility of some of the players being a little drained, but they have already turned up for training and this shows that they are committed and ready to go. These guys are fully fit and are serious about doing well. They are coming off of a successful WIFA tournament and nothing can motivate one like success,” the always confident sounding Jackson said.

Jackson also welcomed back SVG’s newest professional, Oalex “Bounty” Anderson who recently signed on the dotted line for the Seattle Sounders FC Two in the MLS at terms not made public.

The 19-year-old Anderson rated as possibly the most skilful player since Marcus Young to have come out from the Central Leeward area fell across the radar of the US press when he scored a 79th minute goal after coming on as a substitute to help his team beat the Oklahoma City Energy 3-1.

Jackson said that while there are a number of talented players in the squad, it was great to have such a player as Anderson in the team.

“He is a very good player and having been exposed to professional football over the last few weeks that should be a plus for his game and the team as well.”

Anderson, who made his senior national debut just about 18 months ago, has been a much talked about and followed player since his avarice for goal-scoring was first noticed at the schools level. He has so far found the net as many as seven times for Vincy Heat in the handful of matches he has been selected to play prior and after being sidelined because of a broken leg.

Prior to travelling to the US, Anderson is said to have done a stint with Antigua Club team Grenades FC on loan from local club System 3 FC and is reported to have scored 12 goals in his 18 appearance for the club.