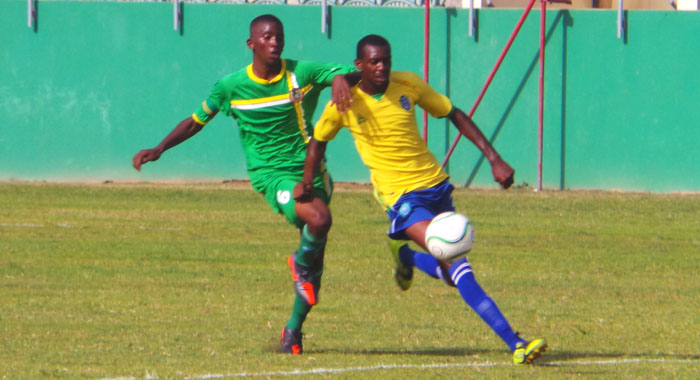 St. Vincent and the Grenadines Under 23 footballers galloped into the next round of the 2016 Olympic Qualifiers with a comprehensive 3-0 trouncing of their Dominica counterparts in their ‘home’ leg on Sunday at the Arnos Vale Playing Field.

The victory gave the Vincentians a 5-0 aggregate win over the two legs after coming out 2-0 winners on Friday in the “away leg” also at the Arnos Vale Playing Field.

Both matches were played in St. Vincent and the Grenadines following a request by the Dominica Football Association, owing to that country hosting international cricket between the West Indies and Australia.

It took goals from Oalex Anderson (51ST minute) Tevin Slater (70th minute) and Chavel Cunningham (90th minute) for the Vincentians to easily brush aside their opponents.

“We played a lot better today and the results show that but we still have to put away our opportunities but I am not too disappointed,” Coach Huggins said in a post-match interview.

Huggins said that there is still work to be done and he is hoping that the SVGFF can provide some friendly matches before the trip to Puerto Rico.

The teams went into Sunday’s match, which was the Vincentians “home game” with Dominica, needing to better Friday’s 2-0 defeat and stop their opponents from scoring.

SVG’s job was to get goals and make the task facing the guys from the “Land of many rivers” slippery.

The first half of the match saw the Dominicans playing a more aggressive style of football and making some threatening runs into the SVG area and creating some anxious moments, which drew a lot of shouting and hand motion from the SVG bench.

The home team’s defence was put under a tremendous amount of pressure by Kennico Soannes, who, in partnership with Delroy Parker, made things uncomfortable on a few occasions but were unable to get that final ball for a real goalscoring opportunity.

SVG also had their period of good build up at the other end but they too were hindered by the poor passing or some on-field calls, which had the crowd screaming its disagreement.

The teams went into the break 0-0 with SVG the happier of the two teams with their 2-0 margin still intact.

The resumption saw Coach Corneilus Huggins making a few tactical changes with one being striker, Oalex Anderson being moved into a central position. And this brought bountiful dividends in the 51st minute when Anderson, who is plying his trade with MLS professional Club Sounders FC TWO in the United States, collected a pass and outran the defence before hitting a powerful shot high past an advancing Elijah Toulon in the Dominica goal.

The goal, the second by Anderson after his first match penalty on Friday, appeared to knock the stuffing out of the men in green, who, despite still having some ball possession, showed the rigours of the telling conditions and the knowledge of a now 3-goal deficit.

Both teams then went to their bench and did a few substitutions and it was the home team that found the net again with classic conversion from Tevin Slater, who had looked a more confident player than on Friday, racing down the left side and, despite being pressured by a defender, was still able to turn the ball past Toulon from a tight angle.

Cunningham put the issue to bed in the 90th minute when he pounced on a rebound off Toulon to hammer the ball into the net.

SVG, by virtue of the win, advanced the next round of the playoffs, where they will compete against host Puerto Rico, Trinidad and Tobago and Suriname beginning June 24.