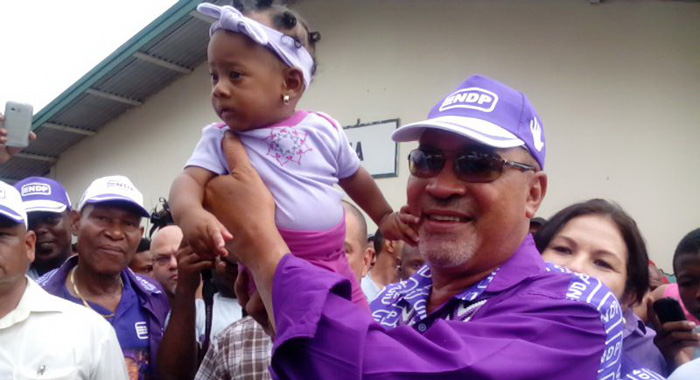 With over 80 percent of the votes counted preliminary results indicate that NDP won 27 of the 51 seats in parliament while V7, a coalition of six parties, secured 17 seats.

Five seats have gone to Alternative Combination of former guerilla Ronnie Brunswijk while the remaining two seats went to DOE and PALU respectively.

It is the first time in Suriname’s political history that a party that contested on its own has won the election.

Final results are expected Tuesday and an official declaration of the results is expected within two weeks.

“Our social programme and the determination of our supporters has paid off,” said NDP’s campaign manager and former minister of public works, Ramon Abrahams after it was clear that his party had a comfortable lead.

Highly controversial due to his military dictatorship during the 80’s and a drug sentence in Holland, Bouterse, who was the main suspects for the murder of 15 opponents in 1982, remains popular due to his social policies.

After he came into power in 2010 by forging a coalition with several parties, he embarked on an ambitious programme to increase old-aged pensions and other social benefits.

Two years ago, the government began paying for the medical health insurance of nationals from 0-16 years and senior citizens 60 years and older.

Meanwhile, several leaders of the V7 bloc have conceded defeat. “We did what we had to, but the Surinamese people have spoken and we have to accept that,” said Gregory Rusland, one of the leaders of the opposition.

A disappointed former minister of Police and Justice Chandrikapersad Santokhi said that although the NDP is set to win the elections he is still waiting for the official results.

While the NDP secured a 27 seats majority, the president should be elected by at least 34 legislators. If Parliament fails to elect the new Head of State and Vice President, these officials will be elected by the People’s Assembly –Parliament and local councils combined together — with a simple majority.

The process to formally have a new government in power could take several weeks. After the elections on May 25, 2010 president Desi Bouterse was inaugurated on Aug. 12 that year.