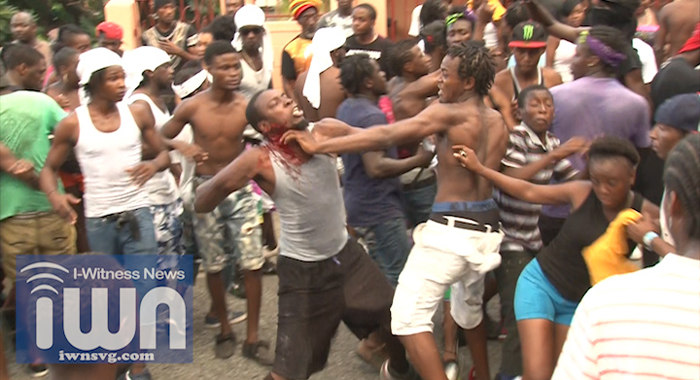 Two men, said to be residents of Barrouallie, trade blows during J’ouvert in Layou on Saturday.

After a bloody fight in Layou that brought J’ouvert celebration there to an abrupt end on Saturday, the Carival Development Corporation (CDC) is again warning against violence in Carival activities, saying that it supports the decision of police to end celebrations where violence occurs.

“Some of the rural carnival events have already started and are having good public participation.

“But, unfortunately, we saw some ugliness surfacing at the J’ouvert events in Layou. We wish to ask those unruly individuals to desist from conducting their violent acts during the Carnival activities,” chair of the CDC Denis Ambrose told a press conference this week.

“Carnival is a time of celebration, and should not be marred by incidents of this nature. We urge all persons do not settle your old scores during these festivities, and better still, choose some OTHER means of settling your disagreements,” he said.

Responding to questions from reporters, Ambrose, who attended the beauty pageant in Layou Friday night, said he was “quite surprised” at the development Saturday morning, which he learnt about from an I-Witness News report.

He noted that a few years ago celebrations in the Central Leeward town were halted because of violence.

He, however, was convinced that the violence was not planned.

“This is really spontaneous action. I don’t think it was anything planned. I don’t think that the police could be ready at all time to address and curb that type of behaviour. And when it did happen, I think they were on the ball and dealt with the situation immediately,” he said.

The fight involved two young men, one of whom sustained cuts to an ear and his back.

“Carnival is really a time of celebration, a time for having fun and I cannot condone and it is hard to even comprehend why person would want to take that sort of violent behaviour or violent action to the streets or in an activity. It is hard to understand why persons would want to do that,” Ambrose said.

He, however, said that the does not think that rural carnivals should be banned because of violence.

“I don t think that’s an option. Rural carnivals are important and I have expressed that many times. Rural carnival helps to keep the momentum of the carnival itself,” he said, adding that a lot of talent emerges during rural carnivals, including some of the contestants for the Miss SVG Pageant.

“We have been asked over an over to keep rural carnival active. We work with the carnivals in the rural areas as well to have better activities, better-planned activities, and perhaps to showcase a little more of the carnival culture; whether it is the pan, whether it’s mas.”

He said that the CDC will continue to invest in rural carnivals and expressed hope that persons will exercise restraint whether they are participating or looking on.

“There is no place for violence in any festivity and I hope that those persons who have that intention and are listening this morning will know that the police is taking a very serious look at this and we have been given the assurance that if there is rural activities and there is violence, the activity is going to be stopped and you can only blame yourself for that,” Ambrose said at the press conference, which was broadcast live on radio and television.