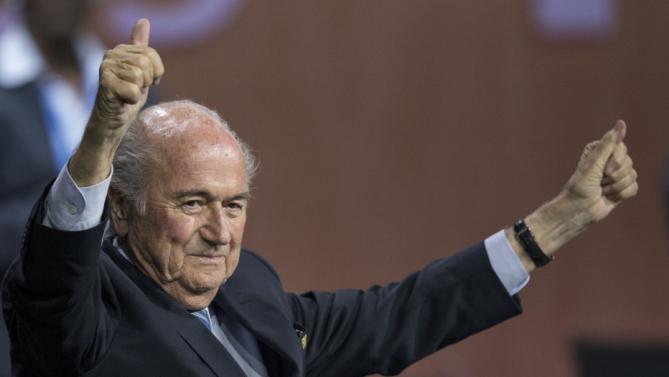 FIFA president Sepp Blatter after his election in Switzerland, Friday. (Photo: Patrick B. Kraemer/Keystone via AP)

They were tall, short, slim and stout, but they all had one thing in common and that was they were all dark in skin colours and they were the first to be seen rushing to hug and congratulate Joseph Sepp Blatter upon gaining re-election for a controversial fifth term as world governing body, FIFA president.

It was some of these men that Lennart Johansson, the president of UEFA, European football’s governing body, had angered in 1996 with comments he made during an interview on a trip to South Africa.

Report say the row was caused by an interview Johansson gave to the Swedish daily Aftonbladet, which quoted him using the Swedish word which translates as “darky” or “blackie”. Johansson was alleged to have used the phrase when discussing events at a meeting to discuss holding the 2006 World Cup in Africa.

“When I got to South Africa the whole room was full of blackies and it’s dark when they sit down altogether,” the interview quoted Johansson as saying. “What’s more it’s no fun when they’re angry. I thought if this lot get in a bad mood it won’t be so funny.”

Johansson subsequently apologised for his comments but was thrashed by Blatter in the presidential race in 1998. It is the views of many that his comments may have driven the African votes to Blatter who appears to have the love, respect and appreciation of those people who are encouraged by his obvious desire and commitment to help and develop African football.

The BBC in its post –election coverage wrote: “Nowhere is Sepp Blatter’s support stronger than across Asia and Africa. So why do most of the representatives from those two continents appear to be voting for him again?”

And it continued: Here’s about as succinct an answer as you’re going to get – from the president of the Nigerian Football Federation: “Blatter feels Africa. What Blatter pushes is equity, fairness and equality among the nations.”

In the seventeen years since Blatter has been at the helm of world football Africa has been handed an added berth at the World Cup to be at five and with a possibility of an even further increase.

In 2013, Blatter called for Africa to get more spots at the World Cup, giving teams from the continent more chances to win the tournament.

The 2014 World Cup held in Brazil saw 53 European nations competing for 13 spots at the tournament, while the 54-nation Confederation of African Football will have five teams in Brazil, and Blatter was reported in the Daily Mail as saying back then that the continent is “woefully under-represented at the World Cup”.

He said then that “as long as this remains the case, African sides may never win an intercontinental trophy, regardless of progress on the playing side. This flawed state of affairs must be rectified, the Daily Mail reported.

According to the paper, writing in FIFA’s new weekly magazine, Blatter then repeated a call for the number of guaranteed World Cup berths for Asian teams to be increased from four.

The president also reached out to another of his base that of CONCACAF at their congress the Bahamas in April by calling for a fourth berth for the region.

He said that the confederation should get four guaranteed slots at the next football World Cup in the wake of the region’s good results at last year’s tournament in Brazil. Three of the four qualified CONCACAF teams advanced from the 2014 group stage, with the US and Mexico reaching the last 16, and Costa Rica the quarter-finals.

It is this approach that many believe that has found Blatter being at the end of the ire of Europe.

CONCACAF currently has 3.5 berths, with one team going into a play-off with a representative from another confederation, in that case Mexico advancing over New Zealand. FIFA plans to set the confederation quotas for the 2018 World Cup in Russia tomorrow May 30.

It is felt that it is based on the direction taken by Blatter and the Financial Assistance Programme -FAP-where member countries are able to get a share of the organisation’s wealth that helped him to remain such an immovable force at the head of the sport despite the many scandals.

“St Vincent and the Grenadines and Countries like ours, have gained a lot under the Presidency of Mr. Blatter and he is one known to many,” coombs said in explaining his decision.

“I was concerned about continued aid to our Country,” he ended, underscoring the attitude of many of the third world football loving countries.

The BBC in puzzled naivety and reality said:” After years of negative headlines, the frenzy has reached fever pitch in the wake of the US allegations of corruption – even though Mr Blatter himself has not been implicated. And running through all this is a theme – bemusement that much of the football world keeps voting for him”.

The vote had taken place against the background of arrests and corruption allegations after seven top officials were arrested in Switzerland on Wednesday as part of a U.S. prosecution that indicted 14 people.Blatter’s rival, Prince Ali bin al-Hussein of Jordan (73), had garnered enough votes to stop Mr. Blatter (133) from achieving his two-thirds majority of 140 thereby forcing a second round of voting. But Prince Ali who holds the rank of Brigadier in the Jordanian army withdrew and conceded defeat much to the delight of retired Swiss army colonel Blatter and his camp.

In his victory speech, Mr Blatter said: “I’m not perfect. Nobody is perfect. But we will do a good job together.”

Blatter, 79, has faced calls to resign, including from UK Prime Minister David Cameron, who said in Berlin on Thursday that the FIFA president should quit “the sooner the better”. But he has also gotten the backing of Russian president Vladimir Putin who has accused the United of meddling in FIFA’s business.

Blatter hailed his victory, thanking all those who voted from him and praising the bravery of his rival, 39 year old Prince Ali, for withdrawing.

The president also gave what is a possible indication of this fifth term could be the final one saying: “At the end of my term I will give up FIFA in a strong position.”

Prince Ali who excelled as a wrestler in his early days found Blatter’s grip on power too strong and thanked his “brave” supporters as he announced his decision to withdraw from the contest.

In conceding, Prince Ali who travelled to St. Vincent and the Grenadines in February as part of his efforts to whip up support for his candidacy vote said: “It’s been a wonderful journey … And I want to thank in particular those of you who were brave enough to support me.”

Michel Platini, the president of the European football body, UEFA, which had backed Prince Ali, said: “I am proud that UEFA has defended and supported a movement for change at FIFA, change which in my opinion is crucial if this organisation is to regain its credibility.”

The two candidates had earlier delivered final appeals to the electors.

Prince Ali said questions had been raised in recent days “about whether our FIFA family is morally bankrupt”.

“There are no easy answers and no blame that can be cast that will wash away the stain that marks us all,” he said.

Mr Blatter declared: “I am being held accountable for the current storm – so be it, I will shoulder the responsibility. I will take it upon myself and I want to fix FIFA together with you.”

The FIFA officials indicted in the U.S. inquiry who include CONCACAF current president Jeffrey Webb and former president Jack warner, are accused of bribery, racketeering and money-laundering involving tens of millions of dollars for almost two and a half decades.

Webb led the confederation that oversaw football in North and Central America and the Caribbean for FIFA and reports say he is being investigated bribery charges involving tournaments under his watch.

According to the indictment, competitions being investigated by the U.S. include CONCACAF World Cup qualifiers, the CONCACAF Gold Cup, the CONCACAF Champions League, and the CONMEBOL/CONCACAF Copa America Centenario.

The aim of the bribes was to influence the outcome of bids to stage football tournaments such as the 2010 World Cup in South Africa and the 2016 Copa America in the US, prosecutors say.

Swiss prosecutors have launched a separate investigation into the bidding process for the World Cup tournaments in 2018 in Russia and 2022 in Qatar, while the UK Serious Crimes Unit has also indicated its intention to investigate the matter.

CONCACAF provisionally banned president Webb one day after his U.S. indictment on corruption charges, the organizing body announced on Thursday.